* I haven't been feeling well lately.  I had my semi-annual primary doc visit last week and all my bloodwork/tests are great!   I am in good health for a woman of my age in my condition......besides my symptoms of aging(shaking of my right hand, arthritis and pain in my neck/shoulders/hands)and on top of my chronic HS symptoms which ebb and flow in no predictable manner.

But lately, I've been battling anxiety as well.  So after a long talk with my M.D. he put me on an anti-anxiety med and it's knocked me for a loop.  Fatigue, dizziness and muscle pain and soreness have kept me from getting much done for the last week.  I went to the grocery store a few days ago and it wore me out and I had to take to my bed for the rest of the day. ugh.
Hopefully these side effects will go away with time....if not, I'll talk to the doc and try a different medication.
A different doc put me on Prozac years ago when I was having a really rough patch and it about made me crazier than I felt so maybe these mood changing meds aren't for me and my body chemistry?
I am not ready to dismiss this new drug out of hand though because it seems to be helping some of the arthritis/shooting pains I get.
Like I've been told, "Getting old isn't for sissies!".  Truer words were never spoken! ;-)
So if I miss a day or two posting it's just that I'm feeling poorly here and there. 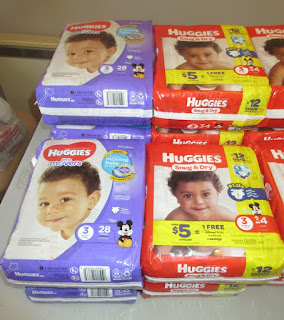 * I think I won't be buying anymore diapers to resell locally.  Not having a problem selling them but MAN!....the assholes you have to suffer along the way to the actual buyers!  People flaking out and not communicating well with you and then not showing up(those get reported to the moderators).

And then there are the down right creepy ones.  I had a guy message me about diapers a couple times and then he said he was at a party(this was a Sat. night)and he wanted to meet me at midnight after he left this party to do the deal. WTF?!?  We worked it out and met in the afternoon at the Weis parking lot(lots of people around)but I did take Hubs with me in the car just in case.  It was a youngish guy(well of course if he has a baby in diapers)but he still gave off a creepy vibe. lolz
And then there are the messages I get that go like, "I want diapers, are they available?"  Ok....what size/type do you want? Give me a CLUE so I can tell you if I still have that size!  And when you respond they either don't answer or they ask you 300 questions about the diapers like they have never bought diapers before.
Maybe this is feeding into my anxiety, dealing with these nimrods. 8-)
What I have left I think I'll put away until Summer is over and then sell them in the Fall.

* I was all out of Dill Weed so I told the Daughter to write a note on the erasable calendar on the fridge that I needed to buy some.
Here's the note she wrote.......

*  Speaking of weed....hehehe.....I had a strange looking plant pop up amongst the tomato plants in the garden.
Anybody know what this is? 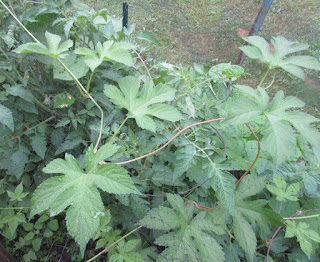 It's a vining plant  and the leaves are sticky. 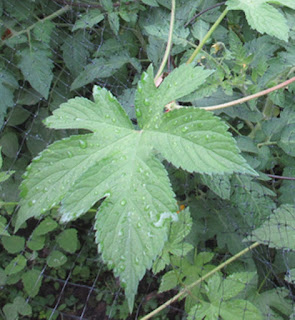 *  Back in May, after Daughter put the window a/c unit in her room she noticed banging behind the screen that accordion's across the window, attached to the sides of the a/c.
Seems a birdie built a nest on the windowsill next to the unit.  You can see part of it in this shot I took.... 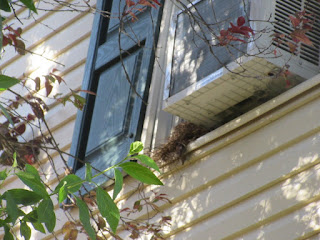 The eggs hatched and daughter got this shot of the almost grown babies in the nest before they flew away. 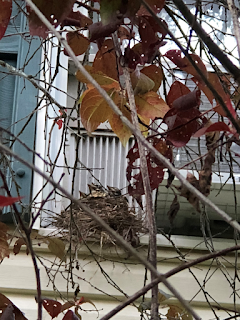 I encountered one of those baby birds the day they left the nest.  I was out in the garage doing something and had the door open when I heard a chirp chirp in the garage.  One of the babies was standing on a might unsteady pair of  legs at the front of the garage.  I shooed him out and he hopped under the evergreen tree out front before trying his wings again and he flit up onto the branch of a maple tree and disappeared.

*  The night we had steaks I gave Chester a bone to see what he'd do with it. 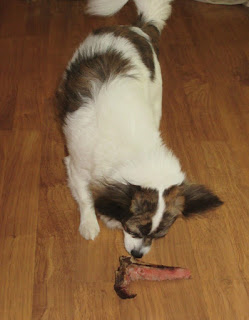 Well let me tell you, after sniffing it a bit and poking it, he thought that was the best thing since sliced bread! lolz 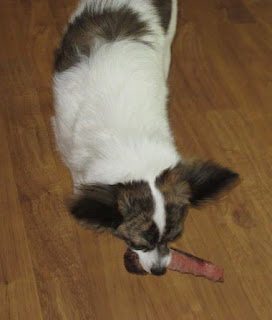 I watched him of course to make sure he didn't chew off a fragment and swallow it(he's got tiny teeth so little chance like the Shepherd/Husky who would have chewed it up lickety-split).

After he had pretty much stripped it the Daughter tried to take it from him and he actually GROWLED at her!  It's the first time Chester has threatened anyone like that.
So we let him take it outside, where he promptly found a hiding spot for it under a pile of leaves next to the side of the house and left it there for later.  After he went inside I retrieved it.  Yeah, I spoil all his fun......

I'll be over here working on closing out June's financials, working on my To-Do List some more and getting the July giveaway ready to launch.

Sluggy
Posted by slugmama at 2:00 PM