When I work on genealogy for my family tree macrame, I don't just work on my direct family lines.  I have been known to fill out my tree branches of the direct family of siblings and the families of folks who marry into my tree.
Because of this my tree has grown exponentially over the years and is the size of a California redwood rather than a spindly birch sapling.
I have been known to get lost in side branches and the branches of those who are related by marriage.
And sometimes a person you find, you just can't shake thinking about them and their life story.

Another thing I am a member of is Find A Grave.  This is a site where people walk graveyards(or access cemetery records)and record online where the dead are buried(or create cenotaphs or 'burial unknown' memorials for those cremated, lost at sea or who's burial place is unknown).  Find A Grave aka FAG can be another helpful source of information when official records are unavailable to you.  FAG can also confirm or help you sort out confusing information in your genealogy research.

A fellow FAG member contacted me a couple of weeks ago.  They had been to a cemetery in VA and had photographed the gravestone for someone I created a memorial for and whom I had placed in a different cemetery.  Their death certificate had listed them buried in the graveyard I placed the memorial info into, but it turns out they aren't buried there after all. 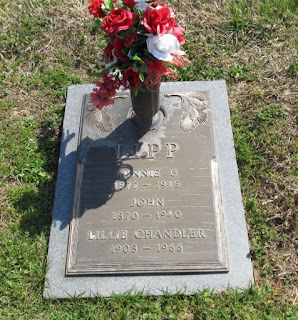 This family is actually related to me through a cousin(we've both done the DNA thing to confirm it and on paper it's 6th cousins)by marriage into her direct line.  Her father's sister married into this family. Cousin's aunt married Carl Anton Lipp.

Carl Lipp's parents were John Lipp and Minnie Urech.
John and Minnie were born in Switzerland and immigrated separately to America-Minnie in 1893 according to Passenger lists and John either in 1881 or 1893 depending on which census he self-reported this information on.
At any rate they both ended up in Nebraska by 1897 and were married there in Columbus on the 29th of April of that year.
In the 1900 census they have one child, Mary, born in 1899 and are living in Columbus, NE.  John incidentally is a farmer.

By the 1910 census John and Minnie have removed to Newville, Sussex County, Virginia and their family has grown to include 5 children-Mary, Frank, John Fred, Bertha and Lillie Olivia.  And John is still farming.

Another daughter was born in Sept of 1910, Rosa Lipp, and a son arrived in 1918 named Carl Anton Lipp.

Sometime between 1910 and 1918 Mary Lipp, John and Minnie's oldest daughter, married a man named Peter T. Piatka.  Their marriage license has not been found online yet but later evidence leads me to believe that indeed they were married.  The marriage probably took place in one of the counties in Virginia were this family lived-Sussex or Prince George county, both of which are south of Petersburg Virginia.

Mary and Peter Piatka had a daughter, Louise Virginia Piatka born on 18 June 1918.

In the 1920 federal census the household of John Lipp contains these family members--Mary Lipp Piatka, John Jr., Bertha, Lillie Olivia, Rosa, Carl Anton and Louise Piatka(Mary and Peter's daughter).
John's wife, Minnie is gone and Mary Lipp is not living with her husband and the father of her child Louise, Pete Piatka.
John Lipp is listed as a widow so I turned to the death certificate records, finding Minnie's certificate and made this discovery........ 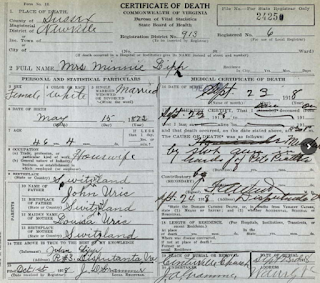 Minnie Urich Lipp died on Sept 23rd 1918, only 2 months after giving birth to her youngest child Carl , at the age of 46.

"Murder by shot gun in hands of Pete Piatka".
WTF???

I then went to find Pete Piatka's death certificate. 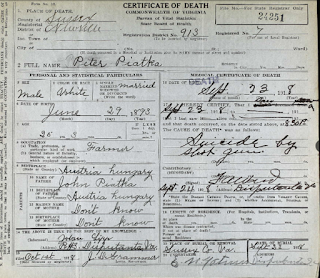 Here is as much as I can find about Peter Piatka from official records.
He was from "Bogaw" Austria according to the ship passenger manifest.  I believe the place name is Burgau and it wasn't written correctly as there is no Bogaw in Austria.  Burgau is in the eastern edge of present day Austria near the Hungarian border.
Peter arrived in American in the port of New York on board the "Caroline" on 13 Feb. 1910, 4 years before the start of World War I in Europe.  He was 18 years old at that time and listed his occupation as a shoemaker.
On his WWI draft registration from June 1917, it states his birth date is 29 June 1892 and he is 25 years old.  He is stout of stature, medium height with dark hair and blue eyes.  He was working at that time as a machinist in Waverly Virginia in a garage and is single.
By June of 1918 he is married and a father and by Sept. of that same year he is dead from a gun shot.

If you are like me, your mind wanders to questions about what went wrong in these people's lives.

Why did Peter come from NY to settle there in this part of VA?
Did he speak only German(or Hungarian)and found a community of German speakers who were culturally similiar in this small town outside of Petersburg, VA?
Did he or a relative in the Austria know someone there?
With the timing of his immigration, was he fleeing the Austrian-Hungarian Empire because he foresaw political/civil unrest and the coming of a war?
Was he a "hot head" who pissed off someone important or did he have a dysfunctional family and was running away from something?
Was there a lack of employment and opportunity for him in Europe?
Was he discriminated against due to his ethnicity?

So many questions we'll never know the answers to.

And then last week this little gem of a newspaper article popped up in an online search....... 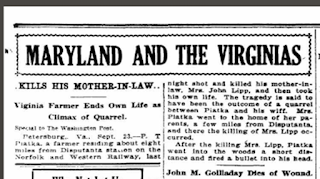 From the Washington Post under their "Maryland and the Virginias" section-

Special to the Washington Post
Petersburg, Va, Sept. 23---P T Piatka, a farmer residind about eight miles from Disputanta station on the Norfolk and Western Railway, last night shot and killed his mother in-law, Mrs. John Lipp, and then took his own life.  The tragedy is said to have been the outcome of a quarrel between Piatka and his wife.  Mrs. Piatka went to the home of her parents, a few miles from Disputanta, and there the killing of Mrs. Lipp occurred.
After the killing(of)Mrs. Lipp, Piatka went into the woods a short distance and fired a bullet into his head.

So mystery solved, at least the bare facts of it.
Either it was a rather large issue which led to this quarrel or Peter Piatka was a bit unhinged.
Either way, two infants were left without a parent and two spouses were left widowed.

Mary Lipp Piatka went on to marry James Walter Bailey sometime after 1921 as they had a son in Aug. of 1922.  Helen and John Bailey were also born to this couple in subsequent years.
Mary Lipp Piatka Bailey lived until 2003, dying at the age of 104. 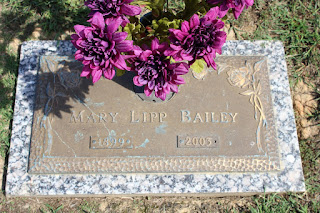 Louise married George Franklin Blackwell in June of 1936 in Hopewell, Virginia.  They had a daughter in 1939 and then three more daughters.  Between the birth of the first child and their deaths the family moved to South Carolina.  Both Louise and George would die in South Carolina, in 1966 and 1981, respectively. 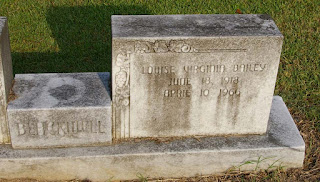 After I made a memorial for Peter Piatka on Find A Grave I contacted the people who maintained both Louise's and Mary's memorials to link the daughter and wife to Piatka's memorial.  The "owner" of Louise's memorial had a problem with me linking Peter's memorial to hers.  I told him that I wouldn't post the death certificate nor the details of his death and his part in the murder of Louise's grandmother, Minnie.  He declined to link saying that this father info wasn't in her newspaper published obituary.
I don't see the problem with saying out loud what really happened since all the players have long since passed away.
This sort of shoving unpleasant facts of life into a closet is why people become disconnected from their past.  Yes, this is a sad outcome or even a family tragedy if you will.  I believe this was a tragedy as two infants lost a parent each and two adults lost their spouse and one her mother as well over a momentary situation that wasn't diffused in time.
I don't think it does anyone any good to hide from our pasts, even the bad stuff in it.  If we aren't trying to hide from the bad things in life they can't define us.