We no longer have cable tv but I was able to watch the first episode of the new season of "Who Do You Think You Are?" US Version yesterday as it was on You Tube already.

I really prefer the way the UK and AUS versions of this show are handled but I'll watch any country's version and relish it since I am such a genealogy hound. 8-) 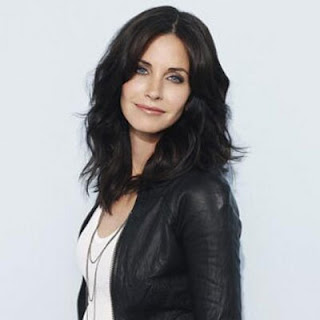 Anyway, they had as their guest/victim Courteney Cox the actress.  I confess that I have never watched an episode of "Friends" in my life, nor will I, on purpose, here on out.

But even so, it turns out we are cousins.  Probably quite distant cousins....something like 15th cousins 2 x removed.
I know of our kinship because we share a common ancestors in King Edward I of England aka Edward Longshanks and Eleanor of Castile.  They two are my 22nd Great Grands and Courteney's 20th Great Grands.

I haven't tried to graft all her ancestors down to her onto my family tree yet but I do know from the tv show that she has an English immigrant ancestor who landed in the Virginia colony(hence her deep roots in that state)in the first decades after Jamestown was founded in 1607.
This ancestor was Thomas Lygon or Ligon and through this line she is descended from Edward I and Eleanor of Castile's daughter, Joan of Acre, while my direct line descends down through Joan's brother, the odious King Edward II or Edward of Caernarfon, who was deposed, when his wife, Isabella of France took up with Roger de Mortimer and seized power.  But that's another story sort of.

Edward II was imprisoned at Berkeley Castle(by another of Courteney's direct ancestors, Thomas de Barkeley, on her Despenser line)and killed there.
Eleanor and Edward II's son, Edward III, eventually seized the crown back and had Roger de Mortimer put to death and his mother Eleanor exiled.

Oh, such a lovely nest of incestuous of love/hate in English royal lines!  ;-)

So this was an interesting episode(and a good English history lesson)but they totally ignored one of Courteney's very interesting ancestors also up her mother's family tree(as were her Despenser and Edward Longshanks lines).

Courteney's mother(through her paternal line)is a direct descendant of John Basse, an immigrant ancestor who came to Virginia in 1622 as a 6 year old boy with his family. His family arrived just in time in Virginia for the Massacre of 1622.  The story goes that John was not killed(though his two older brothers were)but captured and taken away.  John wrote of this time, of eluding his captors at some point and being found in the woods by some Nansemond Indians who took him in, adopting him into their tribe.
John Basse grew into adulthood among the Nansemond and eventually married a Nansemond woman, Keziah Elizabeth.  It is said that Keziah Elizabeth was the daughter of Nansemond Chief Robin and granddaughter of Nansemond Great Chief Peter.

The Bass family line of Virginia who claim Nansemond Indian ancestry, alive today are all descended from John and Keziah Basse.
The Nansemond were part of the Powhatan confederation of Native Indians and were found in what is the Norfolk, VA metro area today.  Once the English arrived in Jamestown this tribe was forced to migrate west into what is now the Suffolk, VA area, adjacent to Norfolk.

The Nansemond are one of the small tribes that gained Virginia state recognition in 1984 and are currently working on establishing a reservation and museum in that area of Virginia.

So this is the long way of saying that Courteney Cox has native ancestry as well.

There was another large massacre in the Jamestown area in 1644, which I'll talk about at a later date.  This era of Courteney's Lygon/Ligon ancestors and ancestors, who married into my line, lives intertwined again during this time in Jamestown.
Funny how we always call bloodshed of Europeans "massacres" but when Europeans likewise wiped out native groups in large numbers it isn't called the same?

Sluggy
Posted by slugmama at 10:23 AM