Let's see how we did with our December To-Do List, shall we?
My month didn't go as planned because of Hubs' accident early into December but we salvaged what we could from the list.

* Pay Bills  DONE  If nothing else I always pay our bills in full each month.

* Bike Something  PASS  Well after Hubs' accident I didn't have much time or energy to bike in December.  I got a few miles in but nowhere near how many I wanted to do when the month began.  Even if I didn't get biking done I was moving a lot more in December so should be in a little better shape by month's end.

* Read 1 Book  DONE  Actually I haven't quite finished it as I only get a few pages in each night.  I highly recommend "As Always, Julia: The Letters of Julia Child and Avis DeVoto" by Joan Reardon.  It's a collection of personal correspondence between the two women from 1952 until soon after Julia's book, "Mastering the Art of French Cooking" was published.  Besides chronicling the path to publication, there are recipes discussed and cooking talk, national politics of that time, as well as personal stuff. 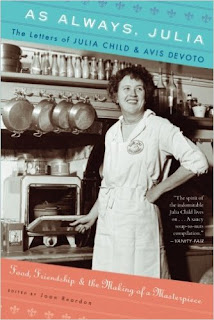 Avis DeVoto was the wife of historian and writer Bernard DeVoto, who was quite popular in the earlier part of the 20th Century in the US.  He had done a magazine article about how French knives were superior to US cutlery back in 1952.  Julia, living at that time in Paris, had sent Mr. DeVoto a fan letter about his article along with a couple of French knives.  Avis, DeVoto's wife was also his secretary and answered much of his mail. Avis ended up writing Julia a reply and a thank you and thus began their pen pal correspondence and later a personal friendship that lasted until Avis' death in 1989.  If anyone can be credited, it is through the efforts of Avis DeVoto and her connections in the publishing world that got Julia's epic book into print and into the hands and hearts of American cooks.
5 thumbs up!

* Shred Papers  FAIL  Nope, just not enough hours in my day in December to get to this.  The project moved to January's list.

* Mail Giveaway  PASS  The package was sent off well before Christmas and received heartily.

* Finish SA Donation #1, #2 CANCELLED  After Hubs' accident there was no way I had time or the ability to get this chore done. 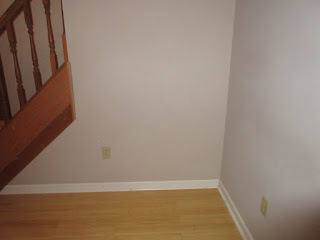 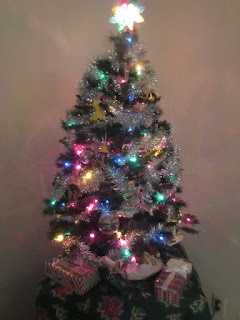 * Decorate for Xmas PASS considering what I had to work with.  Hardly anything got put out other than stockings, a purple garland on the stair railing and the Christmas tree. Hubs had put the door wreath up and the porch lights outside before the accident so we had the bare minimum.
I never got around to hanging the Xmas cards we received onto a silver garland and putting that around the kitchen window frame.
I did however set them all out on the kitchen table for a few hours and snapped this photo..... 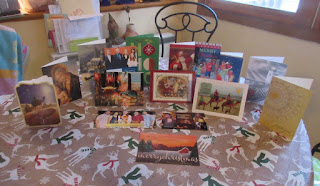 While I didn't get much Christmas decorating done I did cook a lot of goodies and food for the Holiday.

* Finish Xmas Shopping DONE  The bulk of it was finished before December began(thankfully)otherwise there would have been little under the tree this year.  I did run out the Friday morning before Christmas for some last minute gifties(and partly just to get out of the house and away from the invalid). ;-)

* Wrap Presents DONE  I do believe I was up Christmas even wrapping some items and having to fill stockings.  Just not enough hours in the day with Hubs' incapacitated to get everything done sooner this year.

* Make Charity Donation DONE  This year I wrote a check to the local Food Bank.

* Pick-Up College Boy DONE  He got picked up by my Daughter since she was done with finals earlier that day.  This was a big help to me not having to drive to his school and back with everything going on here.  Of course, after I saw what they spent on fast food on the way home on my credit card I started second guessing sending her! lolz

* Finish 2017 Budget FAIL What with a decrease in pay after 1 month on disability and not knowing still when Hubs can return to work and his usual paycheck it's hard to get this finished.  But we are close and I hope to have the budget in place before January is out.

* Take Care of Invalid Patient(and don't kill him) DONE  Well as of this morning I haven't killed him yet.....not that I haven't been tempted some days. 8-)))

I should be able to get a tad more done in January as Hubs gets to where he can do more for himself.

How did you do getting chores on your December To-Do List marked off?