Hubs and I went out a few days before Christmas to use $15 in Kohl's Cash before it expired.  He needed new sweaters as his were getting very ratty so I told him I'd get him sweaters for Xmas...hohoho! 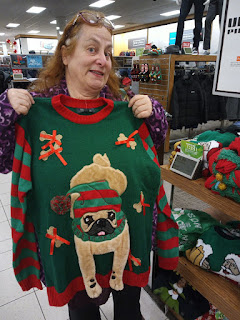 I found this ugly pug sweater but he wouldn't get it.....I wonder why not?!? lolz 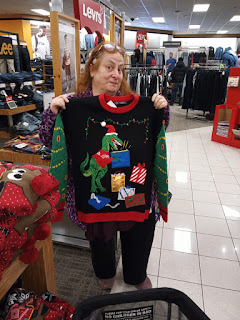 Nor did this ugly T-rex sweater tempt him.  Our Daughter has the BEST T-REX Ugly Sweater anyway so no dice on this one either. 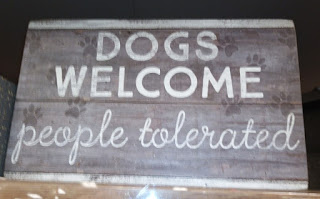 We found 3 sweaters that looked nice on Hubs so I bought them and brought them home to wrap up.  The only thing that tempted me at Kohl's was the sign above. hehehe 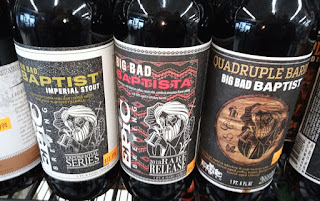 We hit a beer store last week too for some browsing.  I got Ex-CB I 6 pack of something he'll enjoy.
I saw this series from Epic Brewing called "Bg Bad Baptist".  Obviously they don't mean "Southern Baptists"! (PS-the Southern variety don't drink.)

Our local ABC tv affiliate station, Channel 16 news, has a segment every newscast called "TalkBack", wherein local viewers are encouraged to call into the tv station to air their grievances about just about any topic(sort of a 'Festivus for the Rest of Us' but 365 Days a Year).


And of course this is the same tv station that was on the John Oliver Show about their little backyard train outside where the weathermen/women do the weather segment....

Anyway, there is a newish craft brewery over by Lake Wallenpaupack called(wait for it!)Wallenpaupack Brewing Company that is canning some of their beers. 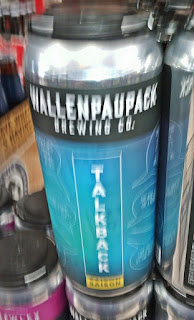 They paid homage to Talk Back with this Saison variety. lolz  I should buy it all, cornering the market and wait for HBO to feature it, so that everyone in the country wants it too. lololz 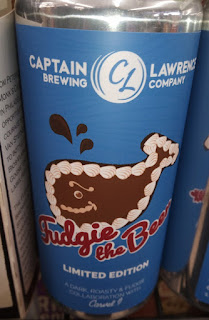 Yes if you remember these commercials for Carvel cakes........


That is THAT Fudgie!  And it's endorsed by Carvel!!lolz 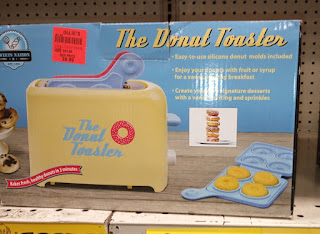 Kim needs this for her Birthday!  It's at Ollie's should anyone want to go pick it up. lolz 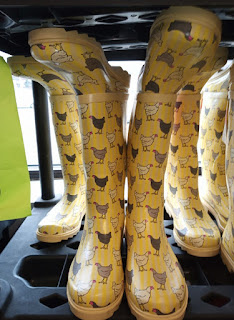 At my Rite-Aid this appeared there a few weeks ago..... 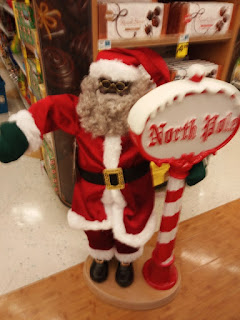 Yes a black Santa.  My teeny tiny town "may" have 3 Black people living in it(and they are all in the same family).  Why would R-A ship him to my town's store and not down the mountain where there is a large black community?
It's a head scratcher.  The person in charge of distribution at the R-A warehouse needs some pointers that's for sure. 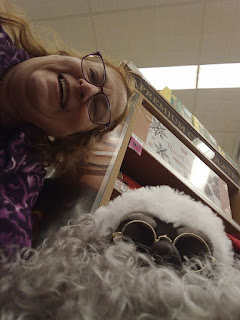 Me and one of the employees at R-A sort of adopted black Santa as our mascot.  Every time I go to R-A I find where they've moved him and check-up on him.  As of Sunday he is 75% off and still there.  I told the manager they should keep him as their goodwill ambassador year round. ;-)

We were able to put our big Xmas tree up this year since Daughter's hanging torture rack left with her.  It lived in the living room taking up space where we put our tree so we've been using our little 3 foot tree for a few years.
It was nice to see my white tree again.
Here are some of the ornies we put on her this year......... 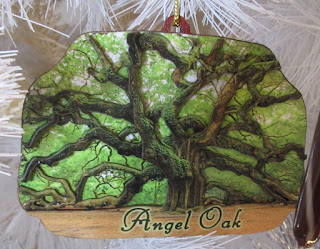 The Angel Oak on St John's Island in SC we visited. 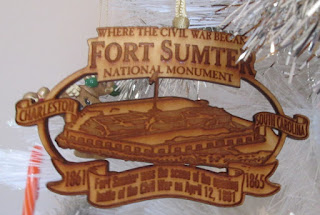 One from Fort Sumter we also visited this past March. 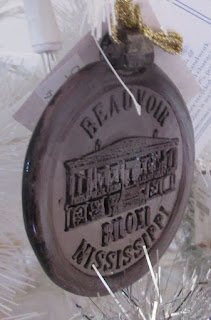 And this purple glass one from Beauvoir in Biloxi, MS in May of 2016 which had yet to make it onto the Xmas tree until this year.  Has it been 3+ years since that trip?? 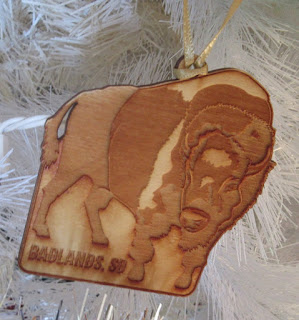 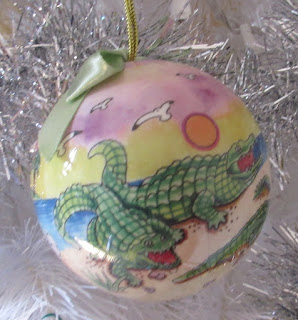 And the 'gator ornie from the Alligator Park in LA we visited in May of 2016 too. 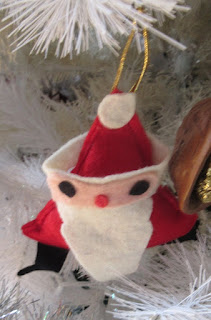 One of the many ornaments my mom made when I was little. 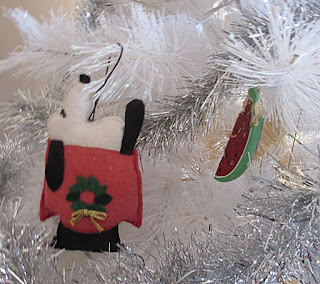 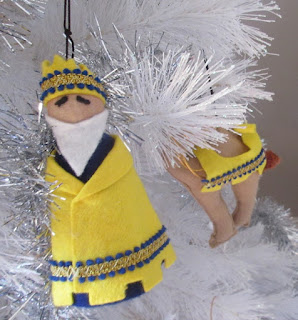 And a set of Wiseman and his Camel I also made back then.  These were modeled on the sets my mom made to sell at our elementary school's fundraiser when I young. 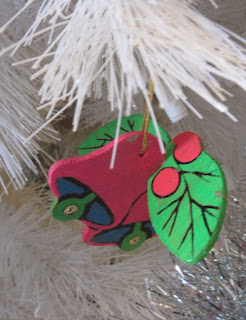 And this is one of the wooden DYI ornies from a kit we made back in the 1960's.  Note the neon colors....lolz 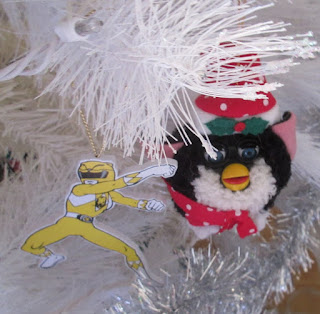 A Xmas Furby from the 1990's as well as a Powr Ranger ornie from when my kids were little. 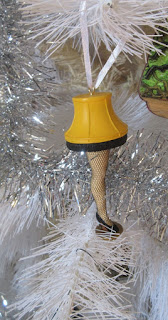 And the tree isn't complete without a leg lamp from "A Christmas Story".


Speaking of which, eldest son and his GF arrived Christmas morning.  After the extended family left we sat down to watch a Xmas movie.  Watching  "A Christmas Story" is a must in this house.  The GF has NEVER seen that movie!!  Is that unbelievable or what?  And no, she wasn't raised in a cabin in the woods away from civilization. lolz
So I rented it from Amazon(since we don't have cable and I suppose they still run it for 24 hours on a continuous loop at Xmas on TBS).  I guess she liked it.
And then Eldest and I made her watch "Bad Santa" too which of course she had never seen that either.  I don't think she enjoyed that one as much. hehehehe 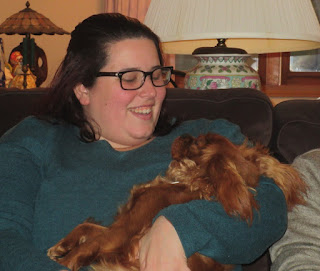 The GF spent a lot of time that day snuggling Dixie, at Dixie's insistence. lol 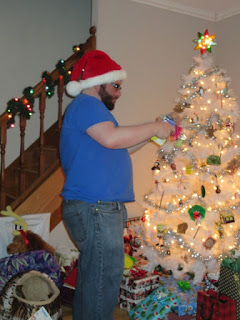 Eldest son played Santa and handed out the gifts. 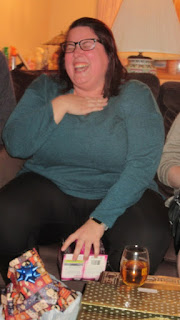 The GF laughing so hard when she opened a gift from me, two boxes of tampons.  Only "I" would give someone tampons for Christmas and now she knows that.  In between the boxes was a coupon to redeem for a free shopping trip in my toiletries stockpile. 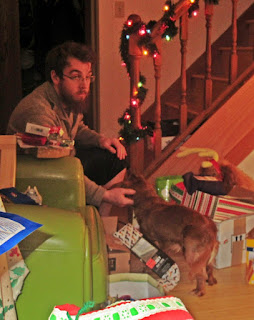 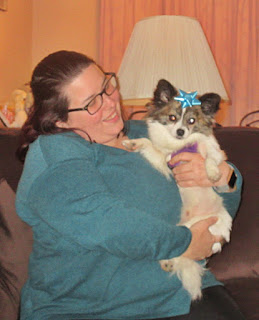 And Chester got some cuddle time too.  So cut wearing a bow on his head(which he detested).lolz 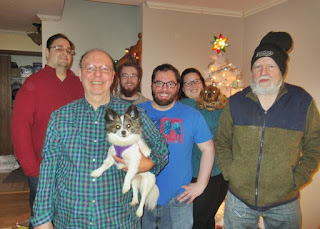 A line-up of the motley crew at our house for Christmas.
I hope everyone got their wishes granted and had a good day as we did here!