Well elder son and his GF just left to head back to Jersey, Ex-College Boy was out of here early for his shift at his work and I sent Hubs to return something to Weis so I can hear myself think again. lolz

Christmas is essentially over here and the household clean-up begins and the getting ready to leave for the trip to Louisiana for daughter's wedding begins as well this weekend.

But first.......
Here's a look at the Christkindl Market Hubs and I went to 2 weekends ago.

A town an hour west of here, Mifflinburg, has held a European style Christmas Market in their town for the last 31 years.  Booths with traditional crafts, food and drink you'd find at a German Holiday Markt, as well as traditional specialties from other regions of Europe are all to be found there.

It only goes for 3 days a year in Mifflinburg, a Thursday to Saturday.  We saw a report on it in Friday's news and were free on Saturday so thought, What the heck!, and went to check it out.  We've lived in our current town for 19 years and had yet to make our way over there for the event.

There were two problems though........first the parking and signage.  There were no clear directions on were to park, though we did find out there was a shuttle bus from some place clear on the other side of town but otherwise you were on your own and good luck finding street parking.

The second issue was the weather.....it rained. All. Day. Long.  And the rain got heavier as the day went on and it was in the 40F's which made it pretty miserable to linger there for a long time.  We also didn't dress appropriately.  Hub's had a hat and a rain slicker and I had an umbrella and a fleece coat on.  Gloves would have been an excellent idea but alas, my brain didn't think of that. ugh.
So basically we made a speedy pass through the entire market with a couple of brief stops and then left in a soaking wet condition. 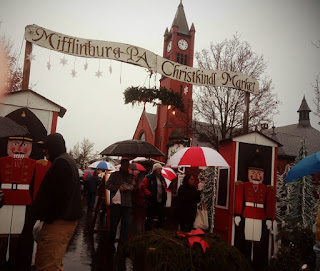 Here's the main entrance where the shuttle bus let you off.  The brick church in the background and the old fashioned wooden painted gave it an authentic, albeit shabby, look.  I'm guessing here since I've never been to Europe or a Christkindl Markt there.
There were moderate crowds but with all those umbrellas to dodge making your way through was slow. 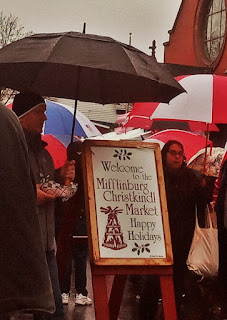 A sea of umbrellas held by taller than me people meant I was dodging metal ferrules(tips)threatening to poke me in the eye and water running off of their bumber shoots. 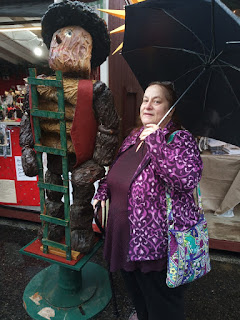 Here I am posing with a Zwetschgenmännle or Prune Man.  The tradition of making little prune people figures started in Nuremberg Germany. They are suppose to bring luck.
It's said there...“Hosd an Zwetschga im Haus, gäid dir es Geld und Gligg ned aus” or "With a prune man in your house, money and happiness stay too.".  Maybe I should have brought one home with me to ensure that I keep finding change! lol 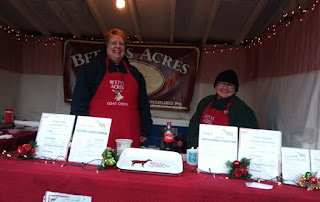 Here are the vendors of a booth were we actually bought something.  They were selling goat products-cheese, fudge(goat fudge?!?), milk, soap and lotions.  They are from Mifflinville not Mifflinburg, which is a lot closer to us and we have been there.  We tried the fudge and flavored goat cheeses and bought some cheese. 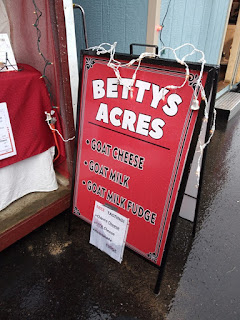 Very nice folks and products.  If  you are ever out this way, look them up. 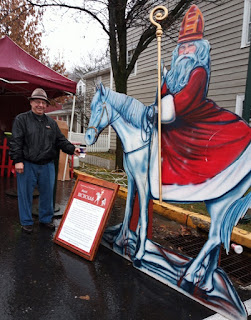 Here's Hubs feeding St. Nicholas' steed from coffee.  He needed warming up in the rain too. 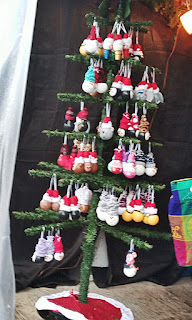 This was one of the odder vendor booths, the Light Bulb Lady.  Evidently she takes old burnt out light bulbs of various shapes, paints and decorates them into Christmas tree ornaments.  An ingenious way to recycle old light bulbs really!  I didn't get close enough to see how much she was charging for them though. 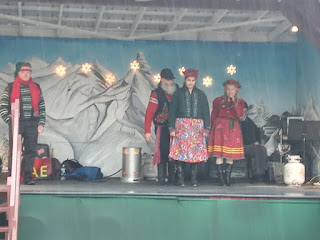 We made it over to the entertainment stage just in time to see a set of folk dancers in costumes performing various dances.  I thought I had my phone set on video but it was on still photo so I didn't get film of them dancing. oh well.....
They had a space heater up there on stage with them.  I was this close to climbing up there and dancing with them so I could keep warm. lol 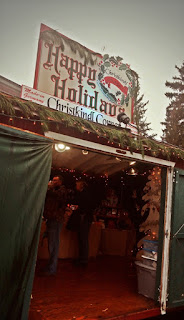 There were tons of booths of craft vendors...everything from traditional wooden Christmas crafts, prune men, to blown glass ornies.  Lots of pottery, knitwear too plus more modern crafts(hello, lightbulb lady!). 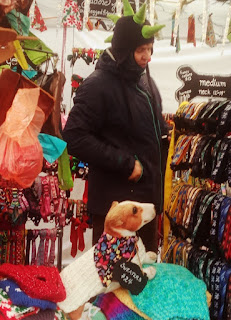 This guy was selling dog/cat sweaters/collars/bandanas/leashes/etc.  All of it was way overpriced since it all looked machine made and something you could get in any pet shop.
I did want his hat however. lol 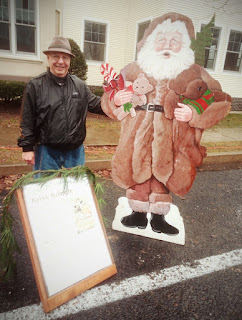 Here's Hubs posing with Kris Kringle.  I think he was asking Kris to make the rain stop for Christmas. 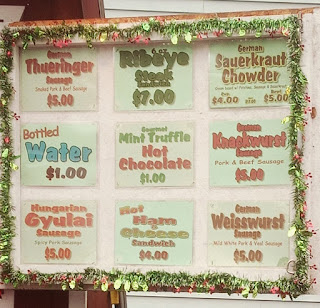 There were TONS of food vendors!  Every kind of German sausage you could imagine, Strudel, Schnitzel on a stick or in a sandwich, Krauts of every ilk, Glühwein(German hot mulled wine), as well as the ever popular Philly Cheesesteak sammies and French Fries.  There were also other Central European specialties on sale for eating.  They had two "Eating Tents" set up to escape the rain while knoshing on your purchases but these were very crowded(no seats available)and still cold and wet so we didn't eat anything there.
This board at one stand advertised a German Sauerkraut Chowder.  Mmmm, no thank you! lolz 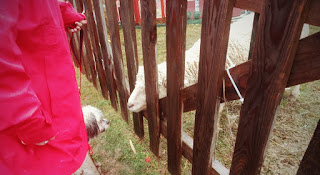 I kept hearing sheep bleating and on the way out I found the Live Nativity area.  The people were wrapped up in coats and looked more like a Boy Scout Troop than Mary, Joseph, Shepherds and Wisemen but the Donkeys and Sheep were cute.  This sheep and dog were having an interesting conversation while I was there. 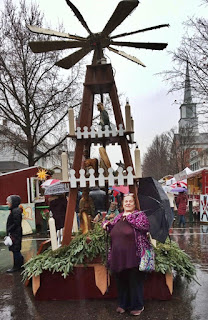 Here's the one photo Hubs took of me in front of the giant German Christmas Pyramid.  My mother gave me one of these Christmas decoration years ago(but hardly this large!).  We always called it a "Whirlygig" since you put candles on it and the warm air moves the blades and spins the figures on it.  I never knew it's proper name and that it was a German thing.  I thought it was Dutch.

We did end up buying two things(besides the goat cheese)to bring home to eat.....2 hunks of Strudel and a loaf of Stollen.  The strudel was heavenly but the stollen left much to be desired.  It was tasty but I've had better from Aldi's. ;-) 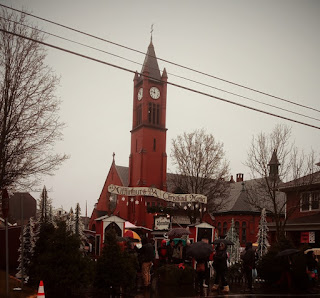 One last look as I left to wait for Hubs to bring the car around.
I only wish the weather was better, we were dressed better and Hubs wasn't a Grumpy Gus.

We did stop at that Amish Grocery Outlet on the way out of town which turned out to be a great thing and made my day complete!