Christmas Past Matters to Me

My mom was what they might term today a "Christmas-aholic".  She loved Christmas!!!

Mom was born in the Depression and her parents didn't have two nickels to rub together when they got married in the early 1930's.  Mom was an only child and was doted on by her parents and her 11 Aunts and Uncles as well as her Grandparents, but not monetarily.  My grandmother wrote a letter to one of her older more well-off relatives to borrow $5(a fortune to them I suppose back then)so that their family could move their meager belongings to Norfolk so her husband could get a job at the Naval Shipyard in Norfolk, Virginia.  Life wasn't easy for my mother's parents....first the Depression and then the civilian deprivation during WWII(rationing)and my grandfather's ill health and inability to keep a steady job.  My grandmother ended up the family breadwinner by the 1950's and died at the age of 53 in 1967.

I had a pretty typical middle class childhood.  My parents married very young and struggled financially but by the time I was born our family was solidly in the American middle to upper middle class of the 1960's and 1970's.  Before that, when my brothers were young and I wasn't around yet, I heard our grandparents funded most of my family's Christmas.

Us kids never got special things though throughout the year as was typical during that time. We could expect 1 gift on our birthday and a small amount of presents at Christmas.....usually one big toy gift, some new clothing and a stocking of fruit and candy.  If we were lucky we'd also get a few little things from grandparents.
But Christmas wasn't just about the gifts.  It was about how my mother made Christmas special in other ways.

* The decorating--Mom decorated everywhere for Christmas.  We usually had a big tree and then a small tree.  When I was about 9 I got to put the small tree up in MY bedroom.  I still remember it was one of those silver metallic Pom-Pom trees that had a revolving base and a 4 colored wheel to reflect off of it.
There were wreaths, holly, mistletoe and candles.  I think mom got her love of Christmas and decorating from her father.  He was an master craftsman and he made a full sized Nativity scene which graced my grandparents front yard every December.
Mom was crafty and also made ornaments for our trees.  One year it was a paint-by-number set of wooden ornies and the kit had sequins to glue onto the finished products too.  One year she made felt ornaments and sent some to our school's Christmas craft bazaar too to raise money for school activities.  She also made little drums(her homage to the little drummer boy), made dancing ladies with lace and chenille stems and wooden doll heads, and another year she made paper-maché dolls.
There was also crochet snowflakes when she was into crocheting.  Not only all of her handmade ornies she bought store-made ornies over the years(a few or a set each year)which were kitchy and very 1970's. And then there were all the ornaments she bought back in the 1950's(and I am sure some of these ones I inherited from her were my grandparents), the fragile glass ones.
I have TONS of ornaments(along with all the decorations she bought after us kids were grown)I inherited from mom.  I would need to put up 10 Christmas trees to use them all! lolz

* The food--Like Thanksgiving, mom went all out with Christmas dinner too, cooking and baking from scratch.  One, what I thought at least, strange tradition on Christmas morning was serving Oyster Stew.  Mom was from South Central Virginia(but she and her parents moved to coastal Virginia when she was five)but I still don't know if this was a family tradition from back in the country where she was born(oysters would have been a high treat once a year back there)or if she decided to embrace this stew later as a tradition after her family moved to the coast where seafood was readily accessible.  I am sure the fact that mom dearly loved oysters in any form/preparation had something to do with it too.  ;-)

* Sometimes a movie or a trip to see a live holiday show on the weekend before Christmas fell. And there was always a trip to see Santa at a local department store with much hoopla.  Many times either my father's employer or some civic organization he was involved in would hold a big party at Christmas where the children were invited.  There were snacks, games, sometimes a show and then Santa would hand out gifts to all the kids(and the gift was usually something your parents gave Santa to give you I found out when I got a little older).

* There was always the special trip Downtown with mom's friends and their daughters together to Christmas shop for gifts for our family and friends.  Searching the stores together for just the right gift to buy for someone with me clutching my dimes and nickels from my allowances, I had saved over months for this grand adventure. And somehow I always worked it out that I had enough gift money left to buy myself a Christmas Book of Life Saver candies. ;-)
After the shopping was the lunch out at the Chinese restaurant which was our tradition.  I took this tradition and incorporated it into our ritual Christmas eve Chinese dinner out with my family. ;-)

My father handed over some money each Christmas and that was about the extent of his involvement in making Christmas happen at our house.  Mom would take whatever amount he budgeted for the Holiday, cash the check and put it into an envelope in her purse and mark off as she spent the money and hoped it stretched to provide for everything she had to buy.

The only time mom told me about my father actually taking an active role in Christmas was when my brothers were young.  He went toy shopping for them and took great enjoyment in that.  Father didn't have the best home life as a boy and after his father left the family there wasn't much money to throw around on toys so he got to live vicariously through what he bought my brothers. ;-)

In the 70's as my father's career was going well and he has making more money, mom would buy gifts for needy kids too through some local organization or other that asked for donations.  So I've tried to repliate that "share the joy" that mom modeled.

I saw my future in-law's pictures of their extended family Christmas gathering this past weekend on FB.  Her Christmas tree was over the top!  It looked like it cost $$$ to put together with all the new and shiny baubles on it.....couldn't see the tree for the stuff covering it. lolz  And all the nice and new Christmas decor in the photos too.  I didn't see a glimpse of anything old or handed down.
Then I see all the Christmas decor they sell in the stores and how a good number of people just chuck all that stuff out when the Holidays are over and buy it new again the following year.

Then I overheard someone in a store shopping for new Christmas stockings, asking their daughter which stockings should be buy this year?
It never occurred to me that people don't use their one and only stocking each year and only replace it if it gets lost, destroyed or worn out.

This is the ONLY Christmas stocking I've ever had!  It's been in service since December 1959.
(Disclaimer-I made myself another stocking after I married and we moved to NJ as "my" stocking had to stay at mom's house for when we came down for Xmas.  I had to have a back-up for Hubs to fill at our house.)

And then I read a fellow blogger's post HERE.
She talked about making Christmas magical for her family.

I especially liked this........"It was the continuity of the decorations showing up every year that gave me comfort and joy"...."I think back on my memories from my childhood memories and reflect on just how grateful I am for them and how much love the feeling when I am drawn back to those simpler times.  This is why I have put up older decorations in my house, to invoke the memories from our families past Christmases for those who live here, and for those who visit during this holiday season."

The newest and the best for Christmas is fine and good but it's not my thing either.  I find comfort in the rituals I knew as a child and incorporating vintage things into my home makes me feel safe and loved and a little closer to my mother who left us 19 years ago this year. 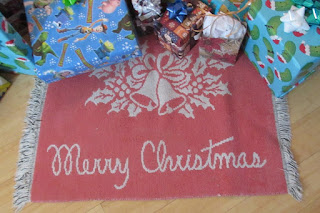 This Christmas rug has been part of every Christmas I've ever known and it will make an appearance every year until I am six feet under.

My oldest brother died in 2007 and my other brother has no children of his own so I inherited mom's Christmas Hoard.  I mutter under my breath every November when I drag it all down but you know, I wouldn't have it any other way.

Email ThisBlogThis!Share to TwitterShare to FacebookShare to Pinterest
Labels: Christmas Past, Christmas rituals and traditions, keeping the Christmas of your youth alive