A Small Local Adventure in April

For Hubs birthday I had gotten him a gift certificate to a local brewery with a tap room in a town south of us, Conyngham.
A tiny village this, the population hit a high in the 1980's but has been on the decline since then, with not much to recommend it but a post office, a restaurant(which College Boy worked at while in high school)and this tap room/brewery. 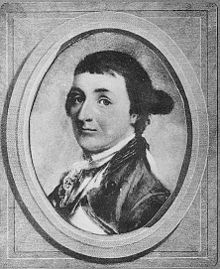 The town is named for a sea captain/merchant/privateer during the American Revolution named Gustavus Conyngham.  Info on Conyngham the man HERE.
Why this village in the hills of PA was named for a guy who never even was there?  It's all because of Gustavus' cousin, Redmond Conyngham.  Redmond served as as a representative in the PA legislature from this county in 1815 and went onto serve in the State Senate in 1820.
George Drum was the first person to settle in what is Conyngham.  George owned land and built up the nearby town of Drums, which is named for him.  When where he lived was large enough of a village to receive a name the idea of naming it after Redmond Conyngham was bandied about.  Redmond said they should name the village instead after his cousin Gustavus who was an unsung hero of the revolution, so they did....but being named Conyngham, nobody nowadays remembers that it's after Gustavus rather than Redmond.

Gustavus had a mighty important friend in his day that you might have heard of-Benjamin Franklin.
Old Ben saved Gustavus' neck(literally, he was to be hanged by the British!)a few times during the American Revolution.
More on Gustavus Conyngham HERE.
I am shocked after reading up on Gustavus that Hollywood has never made a film about his exploits!

I know....this is more than you ever wanted to know about Conyngham, the man AND the village.  ;-)

So we found the tap room rather handily on the main road through the village(not much else there so it wasn't hard to find lol). 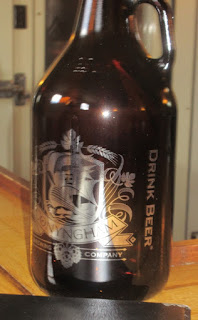 The tap room had a pirate theme(being as a privateer like old Gustavus C. was just a legally sanctioned pirate)....from the growlers with sailing ships to a table in the alcove next to the bar with a game of checkers on it being played by a skeleton wearing a tri-corner hat and a parrot on his shoulder(Arrgggh....I forgot to take that picture!). 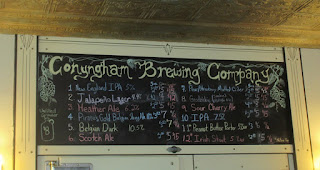 Daughter came along with us and put away a few drinks plus a flight along with Hubs.

They had some interesting brews such as a  Jalapeno lager, a Grodziskie(that's a smoked Polish ale)and a Heather ale(which is a Scottish Gruit-beer brewed without hops, how beer was brewed in Ancient times before someone thought to add hops).  We all agreed that the Heather ale had no bitter taste at all(due to no hops I suppose).  Someone who doesn't like beer might enjoy this one immensely! 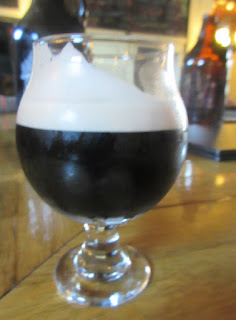 I enjoyed a Peanut Butter Porter.....and then I had another one.  Two drinks and I was all about having my picture took(much to the Daughter's chagrin)and trying to keep from falling off the bar stool(which I didn't do though getting down from the stool was tricky)..... 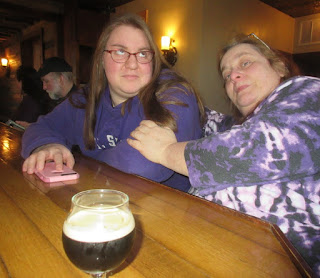 It was a short pleasant outing and we'll have to do it again sometime.

If you are ever in the area this place is worth a stop.
Conyngham Brewing


Sluggy
Posted by slugmama at 9:40 AM