I went out on Thursday looking for those Wendy's gift cards other Dollar Generals in my area.  Found them at one, took a handful up to the register and the cashier couldn't get them to activate. ???
I hit the Bread Outlet while I was out and then grabbed a burger at BK on a gift card and headed home.

On Saturday it was a cold but sunny day so Hubs and I decided to head South of here to use a gift card I won at the Church auction last Fall for a local diner.
Diners in PA are most usually owned/run by Greek descent folks.  The menus are vast, the prices are good and the food in plentiful.
This is one we like Walnut Bottom Diner in Carlisle PA and this one, The American Star Diner in North Wales PA.  Both Greek American run.
Diners offer great deals and food except if you go to a diner it seems in the town we refer here to "Little Havana".  This isn't a negative reference,  It's just that after 9/11 Hispanic NYC dwellers moved here in record numbers to this little PA town.  It's now populated 50% at least by those folks.  You are more likely to see store signs in Spanish than English there or bilingual signage.

Anyway, this diner, both clientele and staff are Hispanic from what I could tell.  The menu was vast, the food plentiful but the prices were a bit higher(probably because being NYC refugees they are use to paying/charging higher prices anyway).
But the food.....sigh.....the food was not what we were expecting.  Not as good and some menu Greek staples which we tried were NOT authentically Greek.  Instead of real Greek olives on Hubs Greek Salad they were canned black olives, like you'd get on a pizza.
Ack!

So at least we didn't pay full price for the meal as the gift card cost me at the auction less than face value and we paid an additional $9 and change for the check.
Oh well.....you live and learn and remember not to go back there again.

On the way down to this diner we stopped at a Dollar General along the way to check for Wendy's gift cards and they had them.
Another attempt to purchase a stack and this cashier also could not get them to validate. ???  This store I had also tried to buy different discounted gift cards at back last Fall before Christmas and at that time the cashier also couldn't get those gift cards to scan.

So we stopped at another Dollar General right near our diner destination and I tired again to purchase the Wendy's gift cards. 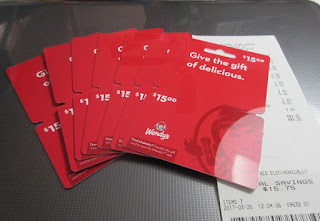 Success!!!!!!
Why on earth do they scan correctly at one Dollar General out of the three I tired to buy these gift cards at?
I think it has something to do with the cashiers not knowing how to ring them up or not.
I now know where to avoid getting gift cards from.
This would have been so much easier if my town's DG carried the Wendy's one.

We've gotten a couple of warm days this past week.  Yesterday it hit the mid 60'sF here.
Here is what is left of our snow pack........ 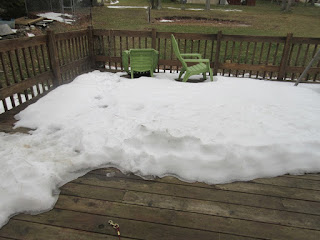 Mostly the backyard is clear but the deck is still covered. 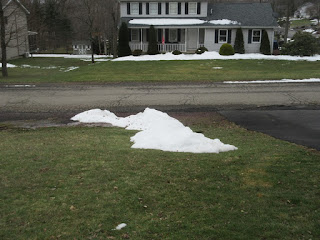 The front yard gets full sun most of the day so we just have some mid-sized piles left.

I cleared my bookshelf area, filed papers away, reorganized my gift card box and list yesterday.
Hubs finished and filed the taxes electronically yesterday.
We had to do FOUR tax filings for 2016....Federal, PA state, LA state and the local PA taxes.

We got a moderate refund on the Federal(which was our money we were FORCED to loan to the government for 12 months interest free!), we owed $2 on the local PA taxes and then we got pounded in the ass on the PA and the LA state taxes!! 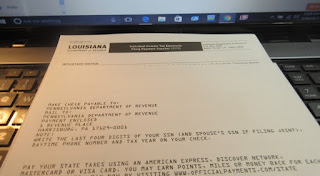 Well that "credit" only amounted to half of what we paid to LA so basically we got DOUBLE TAXED on half the LA income in PA too!
Taxation is theft and doubly so if you pay it twice!!!

It's no wonder people LIE all the time about their income to the government and I don't blame them.
I am so tired of being made to pay for shit I shouldn't have to and supporting irresponsible people's financial irresponsibility.  And then you get made to feel guilty if you don't want to let the government pick your pocket constantly.

So I am off to make "Sunday gravy" and cook meatballs for Hubs' dinner and mellow myself out.

What are you up to today?