I am finally getting around to posting about my road trip from last year.
You know, the one we have taken for the last three years to Louisiana to see our daughter.

Shortly before we left on this trip last year it was decided that the daughter was moving back in with us to Pennsyltucky to go back to school to finish her degree.
And bringing along her boy friend as an added bonus.
And a big dog too.

So this trip was not so much a pleasure vacation trip but a "WTF!? We need to buy her house and then DO something with it" trip.
It's a long complicated story but basically we went to Louisiana to buy daughter's house from her and then rent it out to the BF's parents.  This was the short term solution which is coming to an end and either they will buy the house from us in the near future or they will move out and we will put the house on the market and sell it, hopefully before this year is out.

This was far from a fun part of our lives and we will be glad when this house is done and off our hands but we tried to have some fun along the way on this road trip of 2016.

Let's get to the photos of what happened, shall we?

We left on a Monday after having retrieved College Boy from school on the previous day for his Summer break.
So we headed on out early that morning down the Devil's Parkway(aka I-81)

Somewhere near Winchester Virginia along I-81 we stopped for a potty break at the rest stop.
I saw a first for me, a child friendly toilet....... 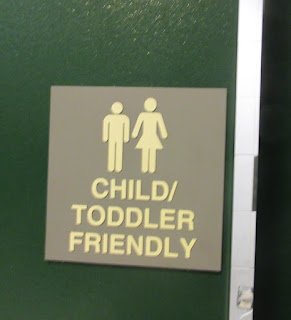 That thing practically sat on the floor! lol
I didn't attempt to use that one as I'd have had problems getting up from it. I moved on to the next regular size toilet stall. 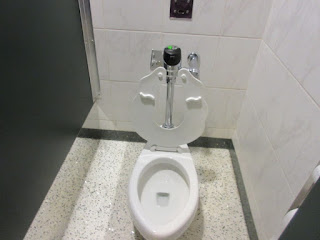 Outside they had this love sculpture so I just had to pose and have Hubs take a photo.

At lunch time we were actually nearby a place I had been wanting to eat at for years during our travels but we never timed it right to be passing at meal time.

This place is a legend as far as dive eateries go and has been around since 1959.  It's Berky's restaurant at the Lee-Hi Truck Stop outside of Lexington, VA.
They are suppose to have an awesome buffet there. 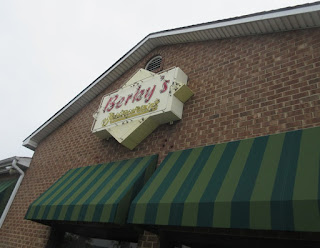 Let me say that I was disappointed in the buffet as much of it was over processed(breaded and fried meats)or canned veggies.  Kind of ordinary and I won't make a plan to stop there again on purpose and be really hungry.  8-(

At a little after 2 pm a little ways further South on the interstate the temp on the car's dashboard read 77F degrees!
Kind of warm for early May in the mountains of Western Virginia even. 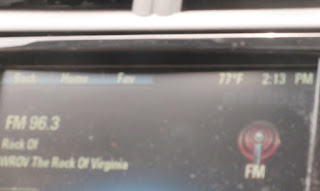 We hit Tennessee about 5ish and drove a bit further until we got past Knoxville and onto I-75 heading South. We stopped for the night about 6 pm in Lenoir City, Tennessee at a Holiday Inn Express. It cost a bit much for a Holiday Inn I thought($141 a night!)but there weren't many choices at this exit. At least they had an indoor pool so we got a swim in(which was much needed after 10 hours in the car)and there was a "free" hot breakfast the next morning.

We hit a Bob's Big Boy restaurant next door for a light dinner.  Besides the menu items and the buffet they also had a "light" buffet price which including all the non-meat choices for a lower price than the regular price.

I started out with a bowl of really thick soup, a salad and unsweetened iced tea. 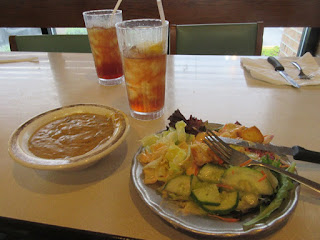 I also got a plate of various veggies and some cornbread afterwards.  That was plenty for me.

After dinner and a swim we settled down for the the evening with a little tv watching before bed.  I noticed that the curtains didn't fully close on the window(and we were on the ground floor)so I utilized a traveling hack Hubs came up with in a hotel room on our previous road trip to Lousiana. 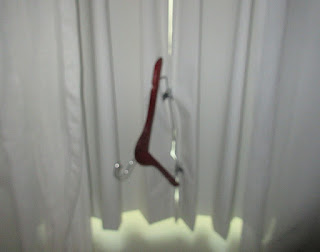 Email ThisBlogThis!Share to TwitterShare to FacebookShare to Pinterest
Labels: 2016 Road Trip to Louisiana, PA to MD to WV to VA to TN, traveling by car