Day Two, we hit the hotel breakfast then the gas station and a coffee place(for Hubs' "fuel")and were on I-75 before 10 am heading South.

We made good time and were driving through Chattanooga fairly soon. 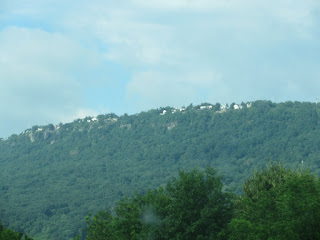 Some houses were visible up on Lookout Mountain.

Next thing you know we were in Georgia... 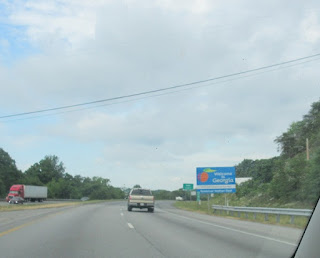 The interstate South and West runs through a little corner of Georgia between Tennessee and Alabama. This wouldn't be the only time we drove into Georgia on this trip however.
Then with a blink of an eye we were in Alabama...... 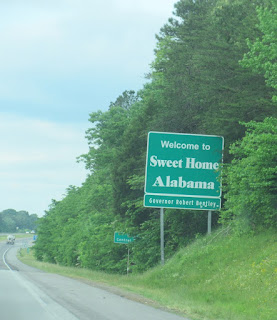 Pretty soon after driving into Alabama I saw a dead armadillo on the side of the road....and then another one.....and another within the span of 20 minutes!
Now I was under the impression that armadillos lived in the South West in places like Texas, New Mexico and Arizona.
Nope.
They also live in the South East in places like Alabama and such.
In total while driving through Alabama I saw EIGHT armadillos along the interstate that day and one was even alive still!

We stopped in Alabama at a rest stop to go potty. As this was the first rest stop once you get into Alabama on interstate I-59(near Valley Head, AL)it was also a welcome center. 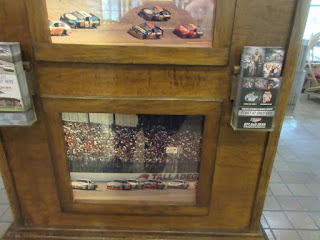 They had big rocking chairs out front so you could sit and relax but it was too buggy and hot already.  So we wandered around inside and collected brochures for things to see/do in Alabama. 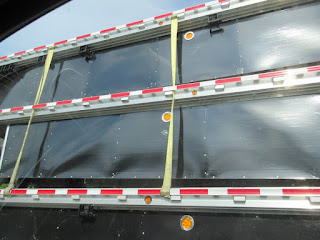 This was a photo I snapped of a truck on the interstate between Georgia and Alabama.  I can't remember why I took it just that there was some kind of livestock on that truck and not the usual chickens, cows or pigs.  Boy I sure miss my mind sometimes.......


4.5 hours after leaving the hotel we stopped to eat a late lunch South of Birmingham off the interstate in Calera, Alabama at Zaxby's. 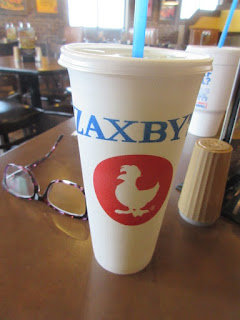 We like this chain which we don't have where we live so we eat there when we find one.  They do a great salad(or as they call then ZALADS)and they specialize in chicken if that wasn't obvious from the logo on the drink cup. lolz

Back on the road for another 3 hours until we got to Spanish Fort, Alabama.  This was just a stones throw from our motel for the night and I had to make a stop at World Market.  I love that store and we don't have any around here so I stop in when we get near one and maybe find something food or drink to buy.
Then we drove not even 5 minutes further to the motel...... 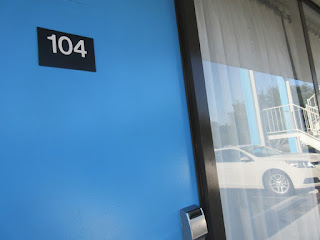 Oh! Lookie what is right across the parking lot from our room! 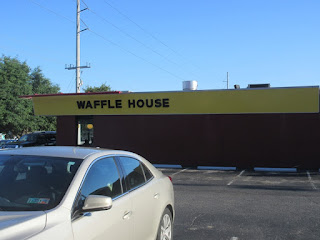 So we threw our stuff into the room and looked around.
This place was by far the cheapest lodging choice we found in this area right off Mobile Bay.
It was an old chain motel location that had been dropped from said chain and was now a private non-chain motel called the Eastern Shore Motel.

Now where I come from the "Eastern Shore" is a peninsula off the East Mid-Atlantic coast comprised of Delaware/Maryland/Virginia.....aka the Delmarva Peninsular. 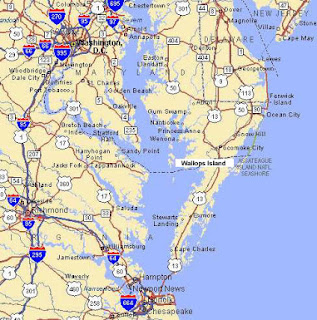 Here Eastern Shore refers to the Eastern side of Mobile Bay.

Though it was only early May it was hot as crap already in Daphne Alabama.  And our room faced West so the late afternoon sun was beating down on our room window.  You can see it peaking around our room curtains behind me. 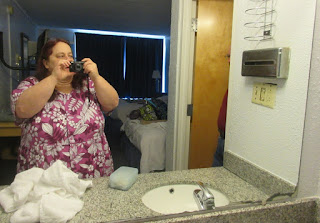 Me taking a photo of the broken mirror and inadvertently a selfie. 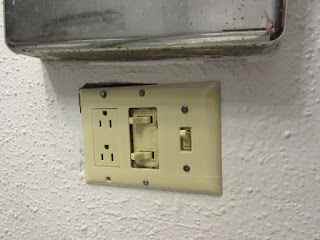 I was almost scared to touch the light switches.  Not because they were so dirty but they sure looked jerry-rigged. 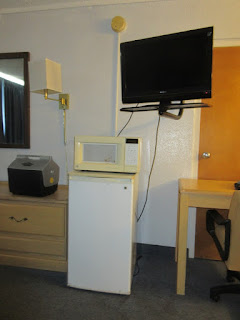 We also had a state of the art *snort* microwave oven(circa 1982)which I wasn't about to try out.  Notice we got the deluxe room with a connecting door to the room next door.
Well what do you expect for $62 a night?  We were only there to sleep and get on down the road the next day.  All I cared about was if the mattress was aceptable and if the a/c worked(and it did, though noisily).

So after "settling in" ha! we freshened up and called my blogger buddy Lorraine who lives down this way.  The plan was to go over to the Clamco Ranch and visit and have dinner with her crew. 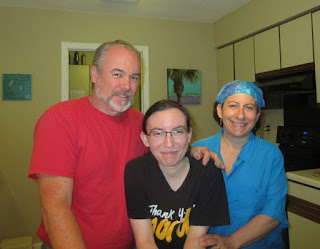 And here they are all bright eyed and bushy-tailed.

Well as bright eyed and bushy-tailed as one can be after working all day.  ;-)
Lorraine is a school cafeteria lady and had a trying day at work that day.  We got to hear all about the work drama and boy! was there!!
She has since changed schools/positions and things are better this year.....I think. ;-)

Anyway we got the Grand Tour around Clamco Ranch(we had visited before but that was when they lived in the Clamco Cottage in Fairhope, Alabama)and Chris's new workshop.
Then we sat a spell with a drink and petting time with Zoey. 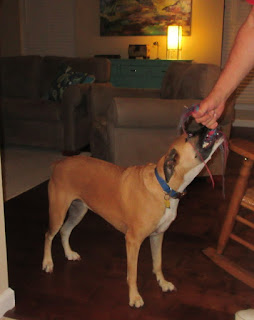 Such a baby and wants to be the center of whatever is going on.  She's a love....

So dinner got ordered(local take-out BBQ), fetched and eaten.
Thanks again for the great vittles Chris and Lorraine!

We sat for hours it seems like and just talked and talked.

About 9 pm we left since Lorraine gets up waaaay to early in the am for work and it was past her bedtime.
We headed back to the luxury motel *snort* and hit the hay ourselves since we wanted to get back on the road early. 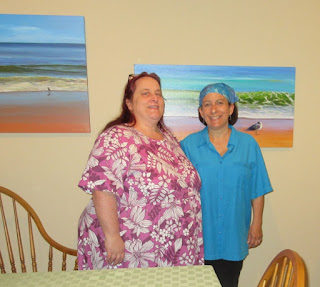 It was a great visit but way too short and it was so nice to see the Clamco Family again.  I am hoping Lorraine gets up North again this Summer or we get down her way(if I don't melt first).  8-))

Day Two was in the books and we were heading West again on Day Three.

Sluggy
Posted by slugmama at 8:13 AM