That's been me the last couple of days.......spending cash left and right!

As you may have read here already, I withdrew some February food budget $ before January was over in order to take advantage of some deals at Rite-Aid.
1 trip there and I was OOP $20.01 but received $15 in +Ups. 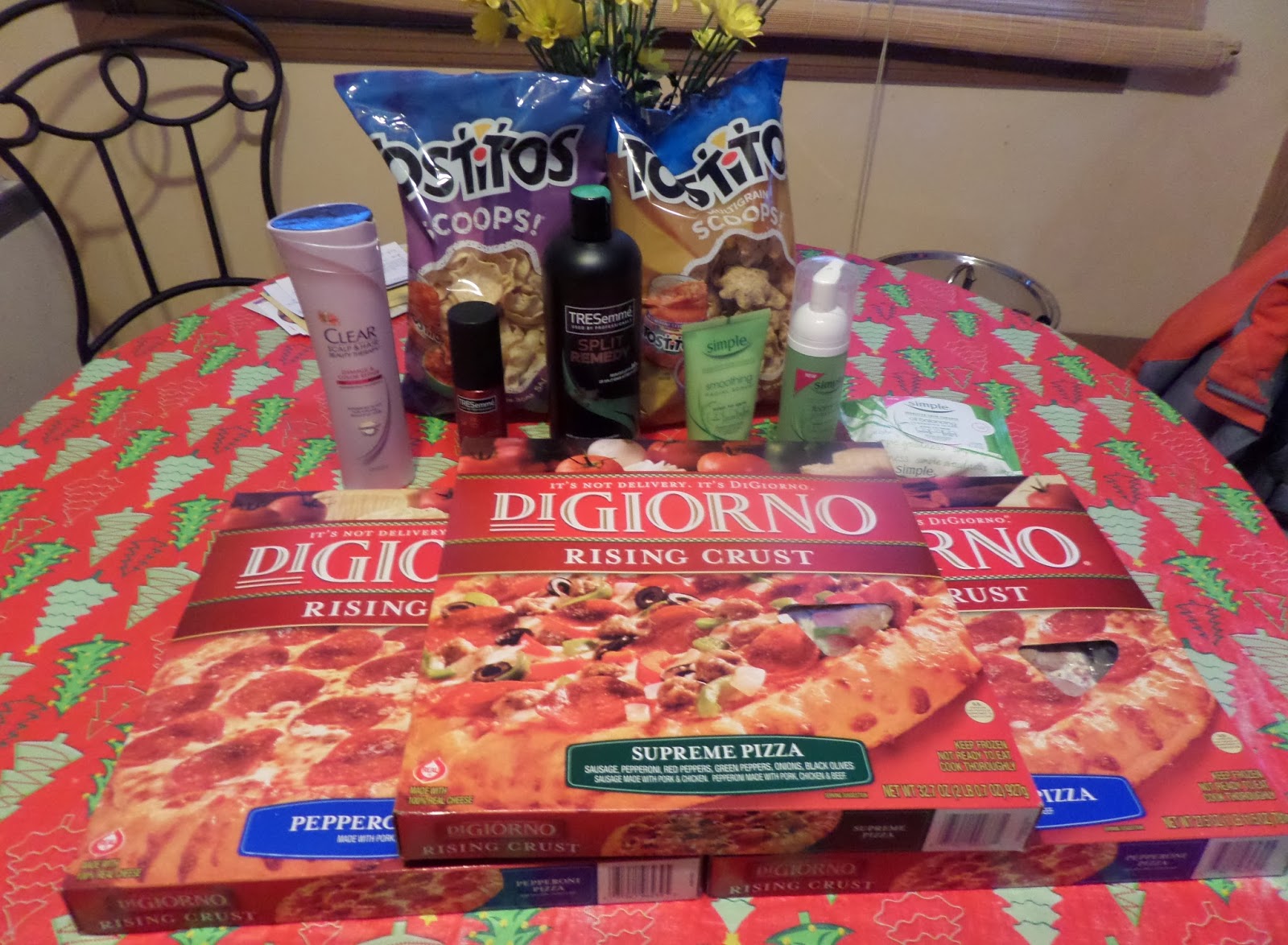 Here's how I spent that $15 in +Up Rewards I got earlier in the week from Rite-Aid.
I went back Thursday evening and did this...... 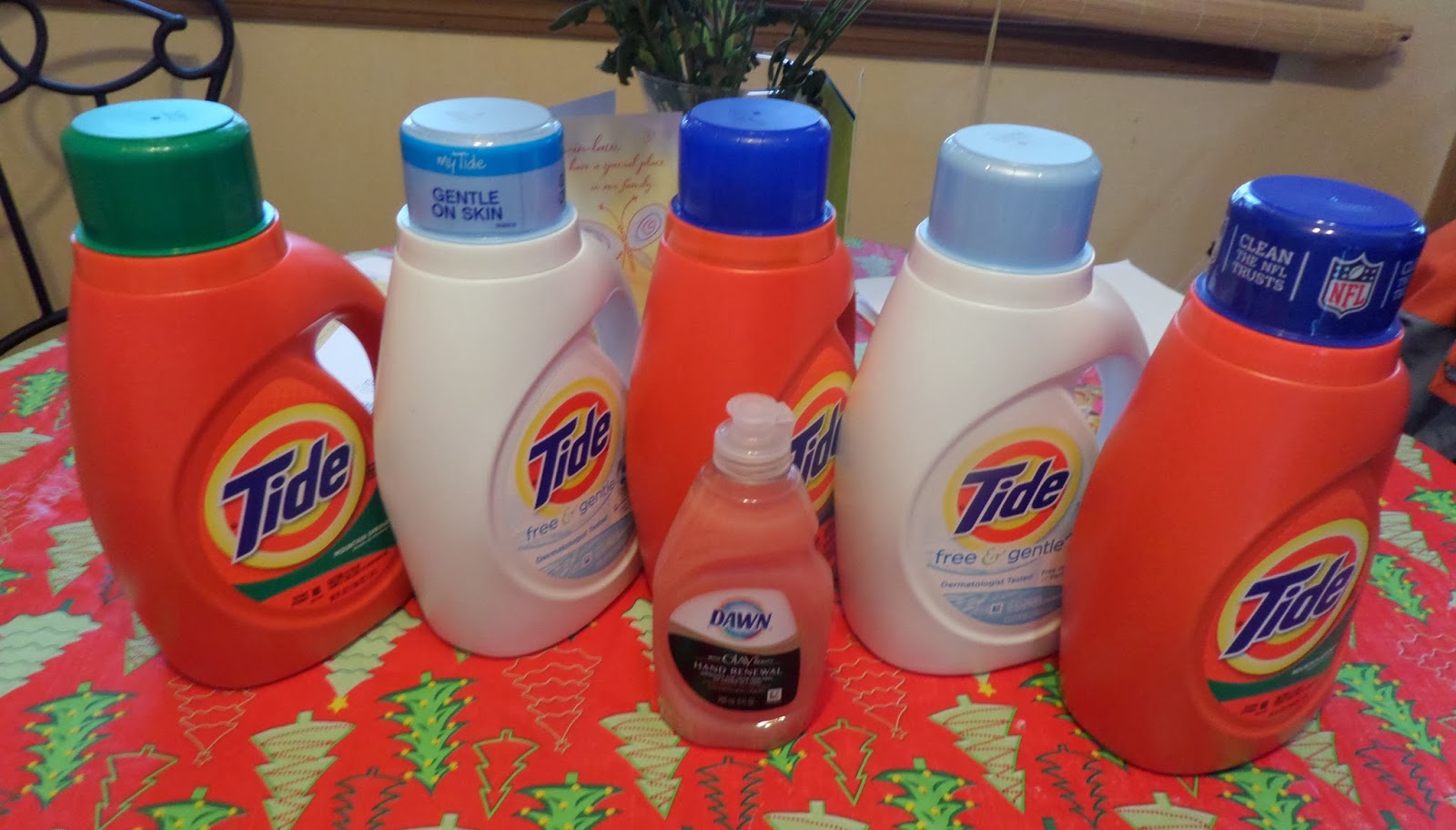 I'm glad I didn't wait to do this until Friday, as they had 1 bottle left on the shelf of the size that was on sale after I took these 5.
I spent $10.69 OOP after Qs and +Ups.
When was the last time you got 5 bottles of Tide for less than $2 a pop?
Never did I hear you say? lolz
I'll save these for the really dirty duds or mix it in with a cheapo detergent to stretch this stuff out.

I received a $10 +Up back for that transaction. 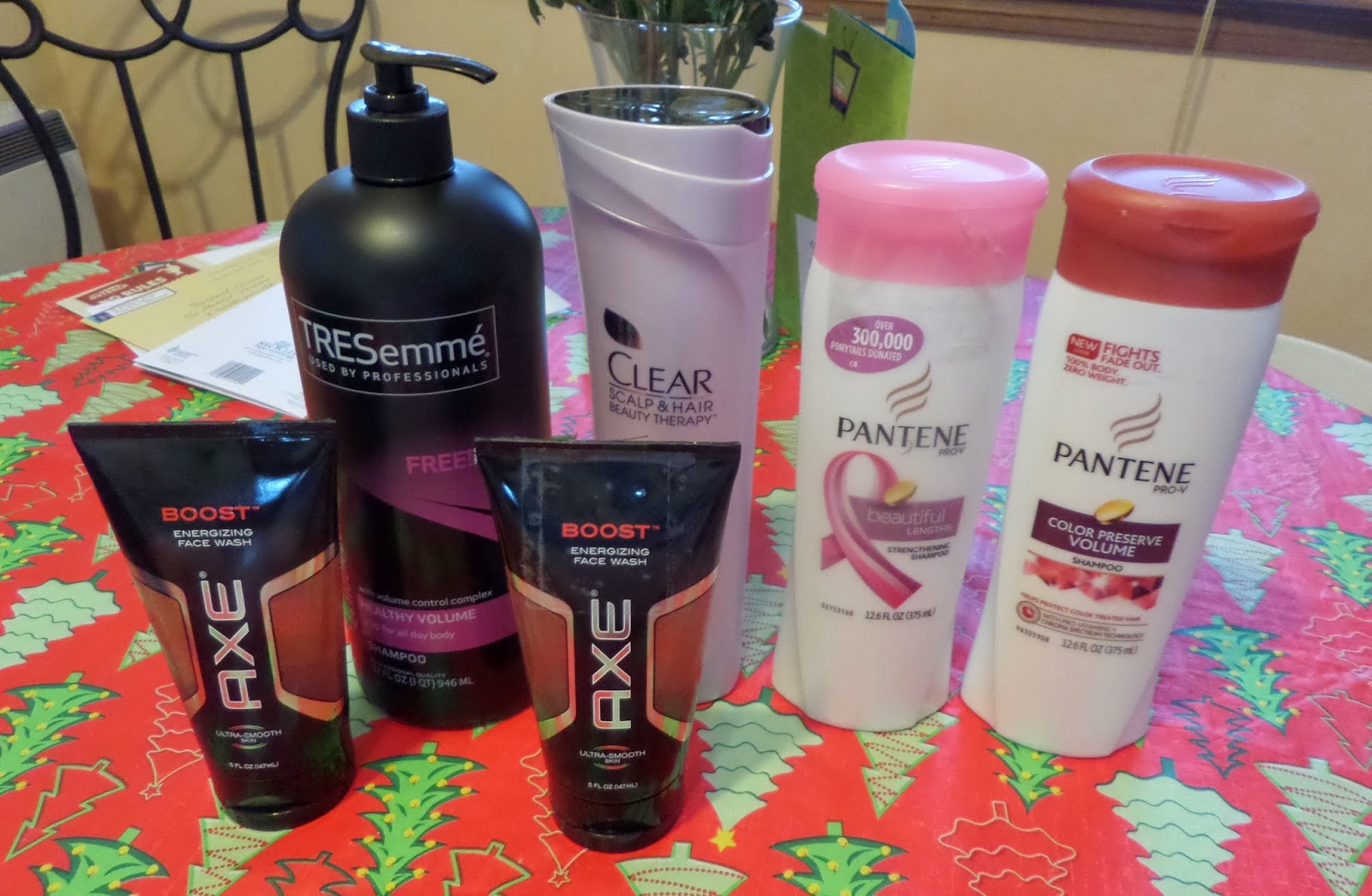 Not a bad day at the ol' Rite-Aid.

I went to the small independent grocer next(sorry no picture)to pick up 2 whole roaster chickens for .99¢ lb. and the bread I like for $2.50 a loaf.

While in the store I did a Kraft deal (Spend $25, Get $5 off).  All the qualifying items were on sale and because they also had a few in-ad Qs for Mayo and Planters PB it made this an even better deal.

I got--5 bags shredded cheese, 1 block of Swiss, 1 large container sour cream, 4 bottle of dressing(sometimes I think #2 Son drinks this!), 2 jars Mayo and 1 jar PButter for $20. 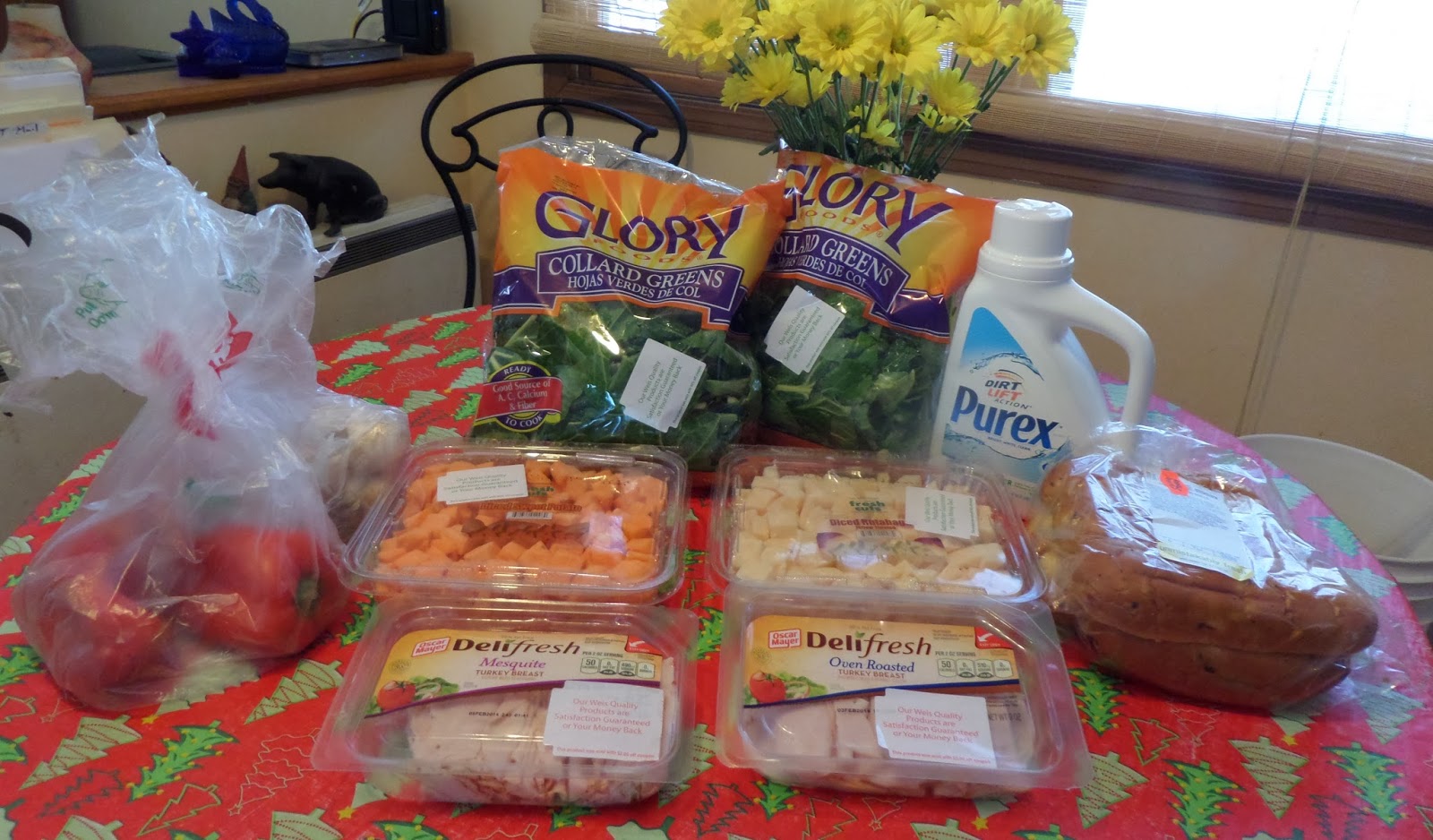 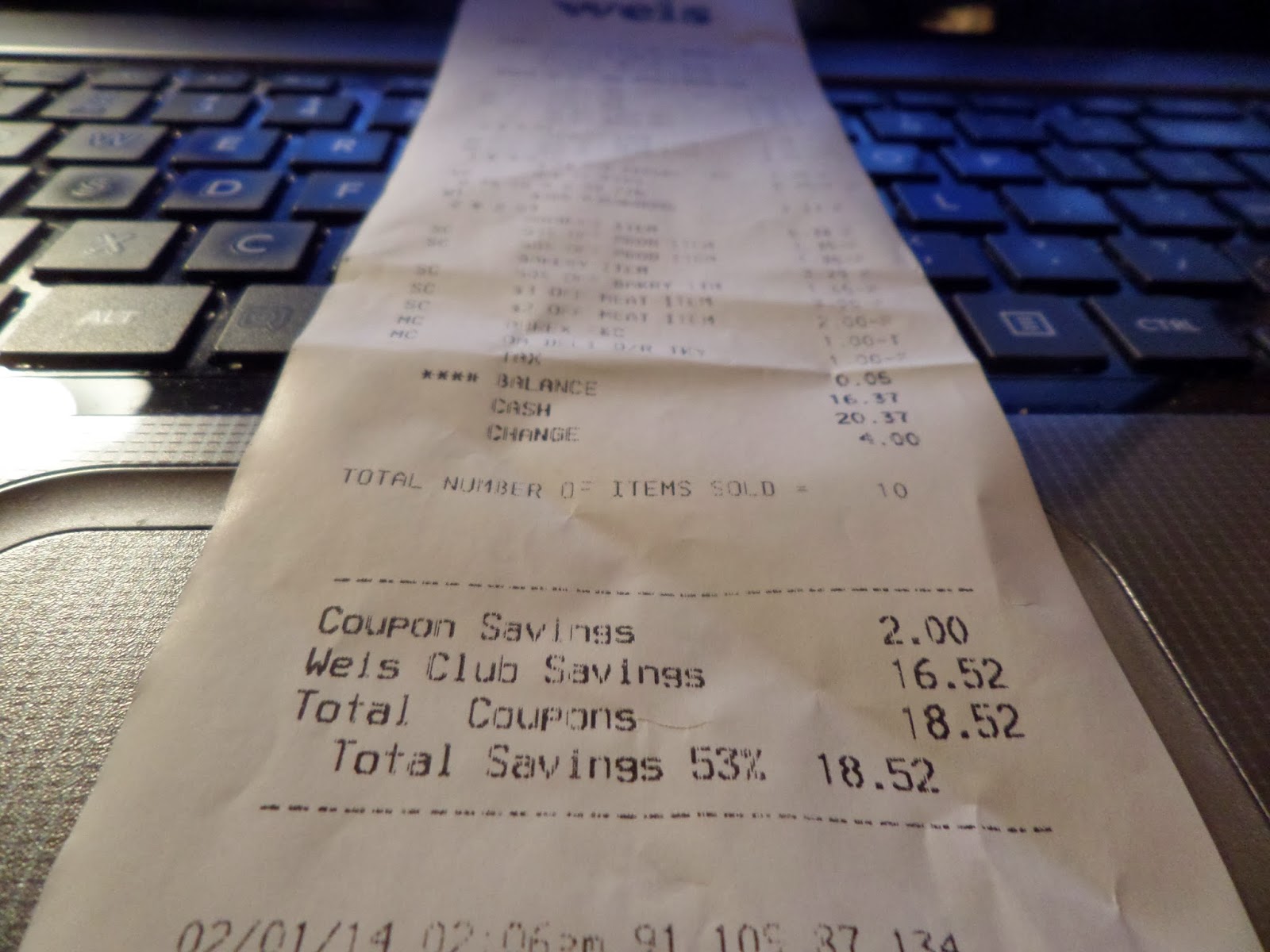 So going into next week(which starts for me on Sunday), can you guess what will be on my meal plan?

Roast chicken-using the one in the freezer already and putting the 2 I bought today in it's place.
Some leftover chicken will be fajitas another night(using the pepper and mushrooms, plus more pepper, onion and tortillas I have here already and some of that Kraft deal cheese & sour cream.)
We'll have smashed rutabagas, roasted sweet potatoes with sea salt and olive oil, and collards cooked the proper Southern way.
I bought Kielbasa a few weeks back so we'll have those on the discounted onion hoagie rolls one night.
The rest of the leftover roast chicken combined with the 2 containers of turkey deli meat will keep me in turkey/chicken sandwiches all next week(as will 1 of the loaves of bread).

As far as my $300 food budget goes for February, I've spent $33.86 of it at Rite-Aid, mostly buying toiletries and detergents....if you don't count that pizza and tortilla chips "junk" food.
Add in the $70.01 I dropped at the grocery stores today and we are at $103.87 spending for February and it's only the 1st.

While it's crazy how fast you can spend on food/toiletries in a few days I'm not worried about overspending this month.

Spending this much on toiletries/cleaning stuff in one month is unusual for me, I won't be spending any more of those categories in February.  And I have $7 in +Ups to use if I find the need for something that isn't food in the next 2 weeks.

As for veggies, I'll continue to shop the 50% produce items at Weis or loss leaders at the independent grocer.  I have chicken breasts, steak, fish, a premade meatloaf & meatballs, chops and that duck breast still in the freezer, so if no meat deals appear, it's all good.

Ok, enough rambling.
I've got stuff to do now and then it's off to watch Suze deny a bunch of people who just "don't get it"....lolz

What did you do on Saturday?

Sluggy
Posted by slugmama at 8:29 PM

Email ThisBlogThis!Share to TwitterShare to FacebookShare to Pinterest
Labels: +Up Rewards, high savings rate over regular price of foods, one third of my February budget is gone already, Saturday shopping, spending on food and toiletries, using coupons and instant price reductions