I go to put the dog out and guess what I see? 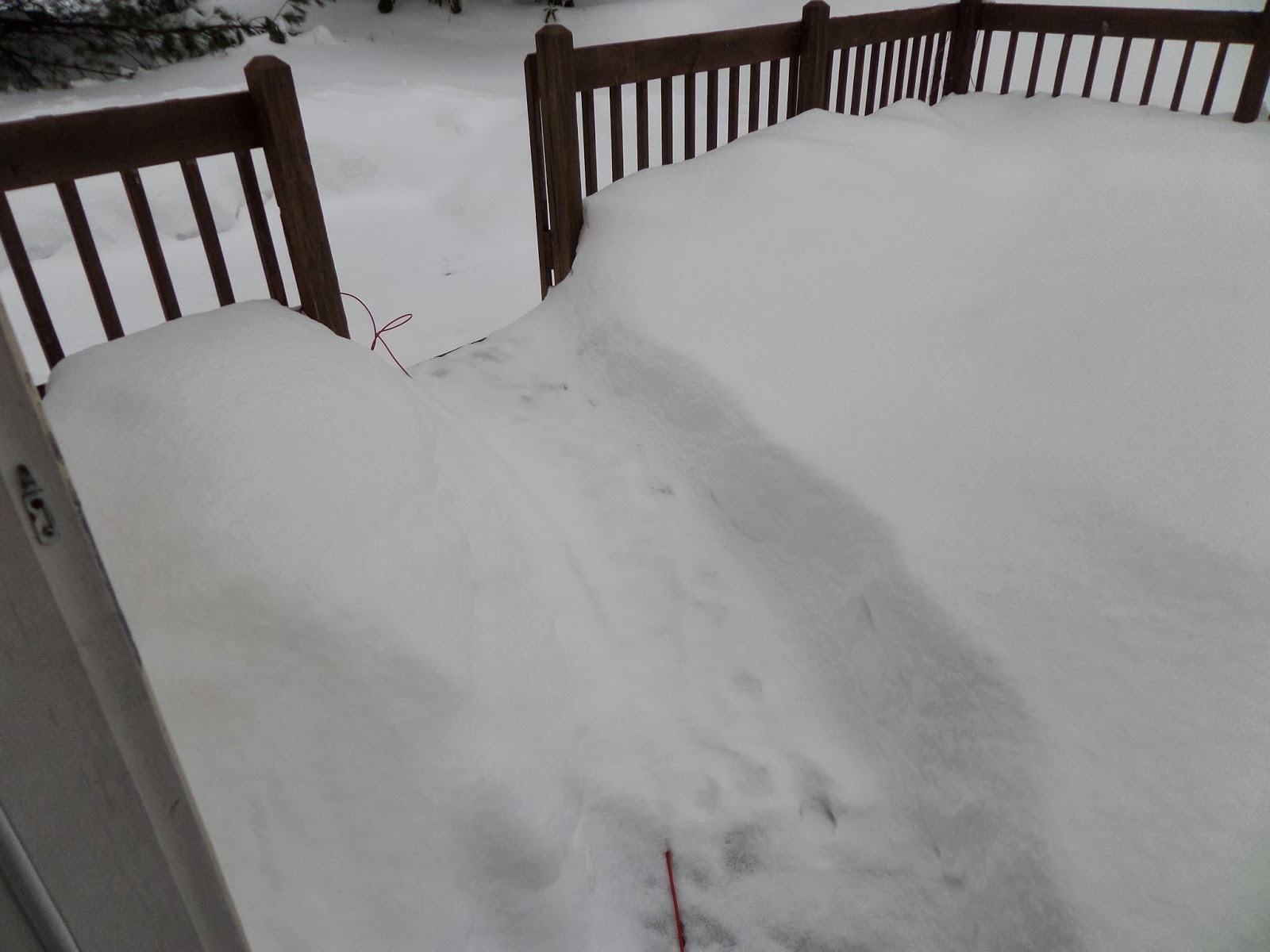 * First off, it is snowing YET AGAIN here.  Friday through Sunday we had 3 storms blow through.  It started snowing again late last night.

Looking at the forecast online it looks like all this week is a pattern of a day of partly cloudy/sunny followed by a day of snow.
Oh joy!

* I may be going to that Blogger Meet-up in Delaware next month.  It depends on if someone who may give me a ride there can.  I should know in the next week if this will work out.
I SO need to get away from here for a bit before I start climbing up the walls!

* I just signed up for 3 month mail order refills on some of my prescriptions this morning through a company included in my new insurance coverage.  I paid $25.18 total for 3x 30 day refills last month.  Doing a 90 day refill for the 3 drugs will cost me $48.28, or $16.09 per 30 days.  It's only $8+ a month savings but since we have to pay full freight on prescription until the $3K deductible is satisfied, I'll take whatever savings I can get.
I just hope this works out and there aren't any issues not receiving my meds in a timely fashion.
And speaking of things happening in a timely fashion...NOT!.....

* Today begins WEEK FIVE of trying to get my DME company situation sorted out in regard to my healthcare coverage.  Despite being told over a week ago now by my healthcare company that my DME is covered and the company they passed me along to should have supplied what I need by now, I am still waiting on someone to DO something!  Now the DME Co. says they still need some form or other before they can deliver DME to me, which the healthcare company says it's all set.
No, it isn't.  My good buddy at the DME company, "Shaun", promised to follow up directly himself with the dr. office and get right back to me on Friday.  It's now Tuesday and "Shaun" is still MIA.
So yes, I get to call again and go through this whole rigmarole for the umpteenth time.
So tired of this......

* I got to have a broken filling replaced AND get a cleaning and ex-rays on the same day last week.  My jaw hurt for 2 days after that, as the dentist has a heck of a time getting the rest of the filling out, and she did some yanking on me.  She thinks they glued it in!
I get to go back on Friday for another filling too.
It's just a wild party around here, ain't it?  ;-)

* I get to go to my primary care dr. on Thursday.  While I am holding steady with my weight is it not heading South as fast as I would like it to be progressing.  The month of December was very bad for my weight loss since I gained.  Hey, it was Christmas and a holiday trip to a German Bier Haus.....what can I say?  January wasn't much better between being depressed and the weather et al.  February has been a wash as well.  I am doing ok health wise......no flu, haven't been sick, just depressed and tired of fighting about these insurance issues, which leads to more depression and "what the hell, I might as well eat my feelings" episodes.  sigh.

I do get to find out about getting off this blood thinner stuff I have been on due to that clot in my ankle last September.  I am due to be finished with this.

* I have had very few Etsy store sales since January 1st.  Frankly I've just neglected doing anything with that this year so far.  I did finally go into the Daughter's old room(aka my fabric lair now)and sort through some piles of fabric so I can get more new pieces up on Etsy.  I had hoped to get the rest of the flannel, corduroy and wool up in January but it didn't get done, so now that all gets thrown back into a tub to wait until late Summer to list it.  At least some of those Winter fabrics are now photographed and written up, so getting them actually for sale on Etsy won't take any time at all.
The last few days I DID get about 30 fabric pieces ready to list(photo'ed, measured, weighed and descriptions done)so I should have those up in the Etsy store this week.

I still don't "get" this whole "favoriting" thing on Etsy.  Someone can "favorite" an item in your Etsy store(it's like hitting the LIKE button on FB)and you can see who favorites what in your store.
I's a STORE folks, not an art show.....I don't CARE who likes my fabric!  I just care who BUYS my fabric!  That's how I judge whether someone likes my fabric or not, if they BUY it! lolz

* I let all the eBay listings expire in January.  I may go and relist everything later this week, just so it looks like I am doing something with it all.  But from what I hear not much is selling there lately for most everyone.  Things will pick up once the tax refund checks start flowing back into buyers' bank accounts though....I hope.  ;-)

* There is still no furniture in my living room besides some boxes of eBay stuff, a coffee table, an old wing chair, sofa table and the folding camp table I was doing taxes on in the dining area.  I just can't pull the trigger on buying a sofa right now.  I am not completely happy with my choices(color, size, fabric and price)plus there is no extra money left in the paychecks until March gets here to cover it.  I know I can yank money from elsewhere but why do that if I don't have to have a sofa right now?
It would just make me grumpier. lolz

* And speaking of taxes, I mailed off the Federal today.
Rah.  Had to redo the Education credit thing THREE TIMES to get it right. ugh.
And that $12K heating/cooling system we bought last year?  Guess how much Uncle Sam lets us take as an Energy credit for it?
$300.
Big whoop. 8-)))

* In GOOD news here.....Hubs gets a yearly Bonus.  We never know how big/little it will be.  It all depends on how his company does for the year, if his part of the business is profitable or not, how he is rated within the company, and the specific formula the company uses to distribute the bonus funds(this formula seems to change ever year and is more complicated than jumping through IRS hoops calculating your personal tax return).
He got his performance review and he was rated as high as is able.  Their business segment also had a fabulous year too.  So it all comes down to the formula they are using this year to decide on how far on the big side of the scale the bonus will be.  We find out Thursday when it hits the bank account.
I am so hoping it's enough to finish off #2 Son's college account with something leftover for us to use elsewhere.
Since as long as I can remember, the Bonus has always been used to fund the kids' college accounts.  At least the last 12 years.....even before we paid off the house, we dumped this money into the college funds.
Next year, if Hubs is still employed there, God willing!, will be the FIRST year in forever that we won't have to put the $ into the college fund.  I won't know what to do with myself if I have to make a decision on what to do with it.....but I'll give it my best shot. 8-)

* Cross your fingers we get to complete #2's fund and have money leftover, because(Sonya plug your ears)we are going to have to buy another car in the next few months.  The Hyundai Elantra needs to go!!  And Hubs won't just wait until August, when #2 leaves for college to just take back the Malibu.
I wish he would just limp along until August, because at that point we won't need 3 cars anymore and it will save having to ditch another car in August.  But he won't go with my plan so we are shelling out more money on cars in the coming months.
Argh.

* #2 Son applied for a new job last night on his way home from his music lesson.  He had quit his old job in January because it was getting so demanding of his free time and left him no time to practice for his auditions for college.  He was working almost 40 hours a week right before he left it.

This new one is just a weekend job so won't cut into his activities and school stuff.  But will give him a little cash so he isn't always hitting me up for some. lol

That about catches y'all up on the Drama here at Chez Sluggy.

What's going on in your world?

Email ThisBlogThis!Share to TwitterShare to FacebookShare to Pinterest
Labels: dealing with crap, random happenings at chez sluggy, saving $ on drugs, time for Hub's bonus, too much snow