The new background wallpaper, since someone asked about it, is an old photo of a place dear to my family.

Back early last year, while digging around online, I found this photo....... 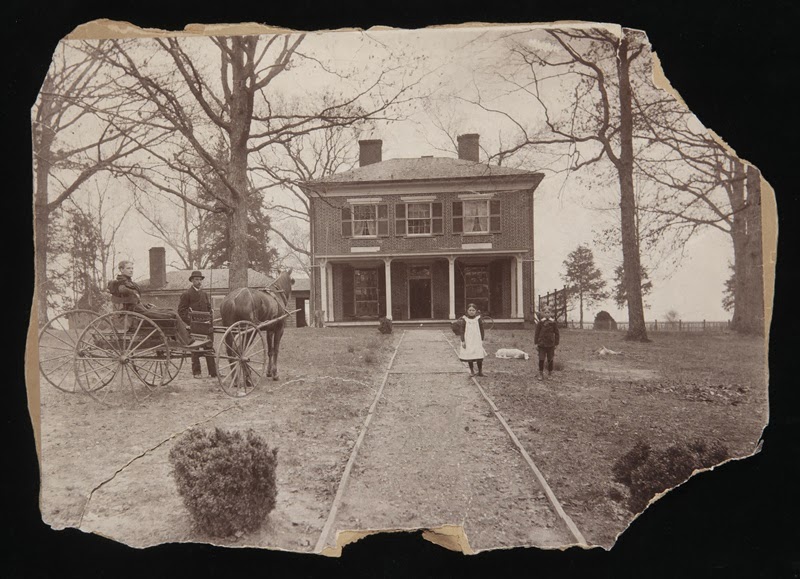 It is housed in the Yale University Rare Book and Manuscript Library, among the collected papers of Margaret Marshall.
But let's back up a bit and start at the beginning.....
Yup, I am turning this into a history/genealogy lesson. ;-)

Margaret Marshall's grandfather was Hunter Holmes Marshall.  He was born in 1820 at Hermitage Plantation in Charlotte County Virginia in the Cub Creek area of that county.
Hunter Holmes married in 1841 Sarah Wilmer Stith of Baltimore, Maryland and brought her to Charlotte County to raise a family.
Hunter Holmes bought a large tract of land, built a house and had that land farmed by the slaves he owned, making him one of the elite planter class of Virginia.  The plantation he owned, he named Roxabel.
Hunter was also a lawyer by trade and became a Judge at some point in his career.  He had a small, one roomed brick office built near the house where he could practice lawyering.

The photo is of the plantation house at Roxabel.
Margaret Marshall White was the daughter of Katherine Parke and Griffin Stith Marshall. Hunter Holmes Marshall was Griffin's father and thus, Margaret's grandfather.

Margaret Marshall was a writer and left her papers(or her grandchildren donated them)to Yale Library after her death in 1974.
This antique photo was in amongst her papers.
It is not known who took this photo or the exact date of it.  Margaret believed it was taken sometime in the 1870's.

Contrary to everything you have been told about Southern Plantations and their Palatial Homes, this photo speaks volumes to contradict that misconception.  Yes, there were many grand mansions in the old South but some Plantation homes were quite modest.
The "wing" of the home to the left in the photo appears to have not been enclosed by 4 walls.  Perhaps it was an outdoor kitchen, which was very common in the South during this time.  Cooking was hot sweaty business and was conducted for most of the year outside, rather than in the house.
Which leaves just the main structure of the house for living quarters for 2 parents, and at it's fullest 6 children.  Add in at least 1(perhaps 2 or 3 indoor servants/slaves)and you'll see that Roxabel was NOT a large plantation home by any stretch of the imagination.

I do not know what, if any, interior changes were made to the main part of the house from it's original construction until I was a small child and roamed inside but I can tell you that there are 3 public rooms downstairs as well as a foyer, a stairway with gallery and 3 bedrooms upstairs.  A bathroom was added so there may have been 4 bedrooms at one time before indoor plumbing, or that area may have been a closet of some sort, I don't know.
At any rate, my great grandparents enlarged the house so the 8 persons(plus servants)who lived in the original Roxabel  was even smaller than the Roxabel I knew from my youth.

The home at Roxabel is a far cry from the typical southern Antebellum estate homes that have been restored such as Oak Alley Plantation or Belle Grove.
Roxabel could barely be considered a plantation house next to those behemoths of grandeur.

There are a woman in the wagon and a man standing next to it, and two young children, a boy and girl, standing on the lawn.
Not sure which members of the Marshall family these are, given that 1870's time frame.

By 1870 Hunter Holmes and his wife Sarah were in their 50's and their last child was born in 1859, so the children might be grandchildren, if in fact, this is Hunter and Sarah.

Or if the adults pictured are not Hunter and Sarah, it might be Hunter's eldest daughter, Mary Ann, making her around 30 in the early 1870's.    She married Robert Henry Gaines in 1868 and they had children--Hunter in 1878, Henry in 1880, Sarah in 1884 and Mary in 1886.  Mary Ann and Robert Gaines moved to Roxabel sometime after Judge Hunter Holmes moved to Richmond, VA to resume practicing law, and Robert took over the running of the farm.

So it's possible if the boy and girl pictured are their two middle children, Henry and Sarah, born in 1880 and 1884, this is a photo of the Robert Gaines family taken in the mid to late 1880's.  Mary Ann Gaines was Margaret Marshall's aunt.
Or it's possible that the children pictured are ones we have no knowledge of that were born earlier in their marriage and that would place this photo firmly in the 1870's.

At any rate, it's still a bit of a mystery as to the identity of these folks beyond the fact that they are Marshalls or Gaines. 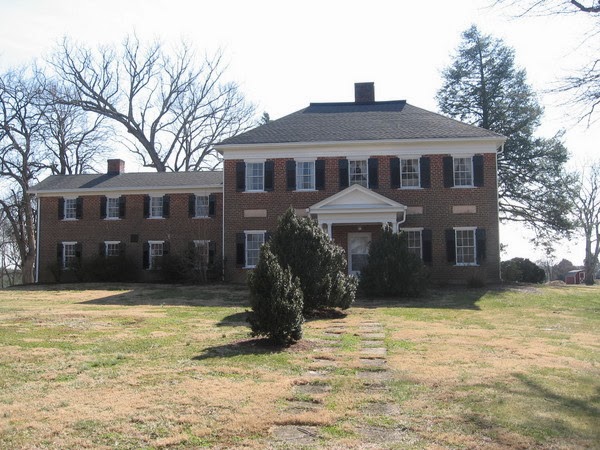 Sometime in the 1930's my great grandparents, who had farmed this land as tenant farmers in at least the 1920's, bought the farm Roxabel.  They had the house extensively rebuilt, as you can tell from the side-by-side comparison below and then moved their family in sometime afterward.

Roxabel passed out of the family sometime after that and was NOT kept up from all I've been told.
It passed through the hands of at least 2 owners after my great grandparents, before, sometime at the beginning of the 2000's, 3 of my mother's cousins pooled their resources and bought Roxabel back.

They continue to restore and bring back to it's former glory the "old home place".
The house and grounds are available to be rented out for weddings and other events.  Contact me for more information if you are interested in holding your event here and I'll pass it along to my 1st cousins 1x removed. 8-)
And of course the family reunion is held here each Fall.

So now you know more of the story and I didn't go too far off on a tangent with the genealogy stuff.  ;-)

Sluggy
Posted by slugmama at 4:28 PM