Back to the Bacon

So let me ask.....did I have you at "Bacon"?!?
I thought that would get some of you to open up this post. lolz

You may want to go read this old post from 2012 first, located HERE.
In it I talked about my Snead/Sneed ancestor.....the first one to come to Virginia, Samuel Sneed and his son, Henry Sneed who is my 9th great grandfather.
Henry got caught up in the infamous Bacon's Rebellion in 1676.

You can go read up on what this was HERE.
It was one of the first revolts in the Virginia colony that foreshadowed the fight for independence from British rule 100 years later.

See?  I am not going on and on regurgitating history lessons this time and am trying to get to the pertinent meat of things.

I find that I have yet another ancestor who took part in that Rebellion.

Through my maternal grandfather's mother, I have a 9 x great grandfather named William Hunt.
Some say he was born in France about 1599.
Yes, another Huguenot ancestor fleeing to the British colony in Virginia?
Perhaps.
We do know he was living in England at the time of his immigration to America, arriving in Virginia aboard the Abraham in either 1635 or 1638....there is some disagreement on the year.

Well it seems from what I've read that old Bill aided and abetted Nathaniel Bacon and was known to be a "Baconite". 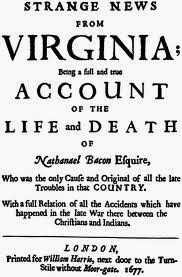 Though he was elderly by those day's standards(in 1676 he would have been close to 77 years), he sided with those that opposed the Royal Governor of Virginia, William Berkley.

Not sure what kind of "help" he lent but he was a planter and a merchant, shipping goods from England to sell to fellow colonists in Virginia. 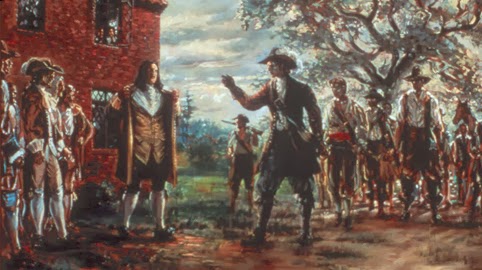 For his trouble backing Bacon's allies, he was thrown into jail and died there in November of 1676 before they got around to bringing him to trial and hanging him for his crimes against the British crown.

After William died, his widow, Anne filed a grievance before the King of England, Charles II, for the return of her husband's property.  Seems property that was still onboard a ship from England when William was thrown into the pokey was seized.  Since he was never convicted of a crime, thus he was not actually a criminal, Anne put forth that it's appropriation was illegal and petitioned for it's return to her, the owner's widow.

Taken from Samuel Wiseman's Book of Record: The Official Account of Bacon's Rebellion--here is the actual wording of the petition put forth to the Assembly in 1677......

"By petition of Anne Hunt widow and relict of William Hunt of Charles City County, deceased on behalfe of herselfe and two children.

Complaining that the honorable Governor, being falsely informed that the said Hunt the Petitioners husband had bin actually in the late rebellion did after his death and without any indictment, tryall or conviction seize the estate of the Petitioner and her children, which had bin getting 25 yeares by the onest pains & hard labbour of the decedent and the aged petition and the same removed and caryed to green Springe. (Green Spring was the name of William Berkley's estate so the cargo was confiscated by the Governor and taken to his home.)

That the Better to Color the said doeings the Governor hath caused a Bill of Attainder to pass the last grand Assembly, whereby the Petitioners Estate without soe much as having the Petitioner or any other for her is adjudged forfeited to his Majestie.

Now for as much as the said William Hunt was never in armes against his Majestie or authority nor ever encourgage, aided or abeted the same; and ever a peaceable and good Subject of his Majestie.

And for that by the laws of England a man slaine or otherwise dyinge in open Rebellion before attainder forfeits noe part of his Estate: And the Petitioner beinge informed that this plantation of Virginia cannot or ought not to make any laws repugnant to those of his Majesties Realme of England.

The Poor Petitioner humbly Implores his Majestie would be pleased to putt a stop to or cause the said act of attainder to be taken of as to your Petitioners said Estate, and that his Majestie in his Royall Mercy will be gratiously please to permit her and her children to enjoye the same for their Support and Maintenance and without which they are most Miserable."

Goods William Hunt had brought to Virginia to sell were still aboard Nicholas Prynee's ship the Richard and Elizabeth, at the time of William's death.  Prynne also petitioned that Assembly that the goods in question be returned to Prynne....possibly because they weren't paid for?

The "Grand Assembly",  referred to above in February 1677, that attainted Nathaniel Bacon specifically identified William Hunt as a "principal ayder and abetter of the said Nathaniel Bacon" who, like the rebel, "dyed alsoe before the rebells were reduced to their allegiance to his majestie by which said meanes the said Nathaniell Bacon, junr...and William Hunt have escaped their due and just demerits for their wicked and unheard of treasons and rebellions."

Then Nicholas Prynne petitioned to keep the goods.....

"Settinge forth that Alderman Booth of London and Company beinge owners of the said ship, consigned to one William Hunt their factor in Virginia a cargoe of goods to the value of 265lb sterling to make sale and returne of for their proper account; for which goods the Petitioner Mr. Prynne gave bill of lading and is thereby accountable for the same.

Prayes restitution of the goods and Redress of the wrong and damage."

Nathaniel Bacon died of the Bloody Flux and Lousey Disease(aka typhus, dysentery and body lice)in October 1676 yet the rebellion continued even after his demise.

Before this incident was all over, Jamestown had been burnt to the ground and Governor Berkley had been recalled to England, where he died in 1677.
William Hunt lived a month past Bacon but neither lived long enough to hang for their part in the revolt as 23 other men had.

See?  Just more and more agitators and rebels in my family!

William Hunt was buried at Bachelor's Point on the banks of the James River in Charles Citie County Va near where the Kennon Creek empties into the James.  Today this area lies between Sherwood Forest Plantation and the Chickahominy Wilderness Management Area, off of State Route 5(also known as the John Tyler Memorial Highway).

William Hunt's granddaughter is my 7th Great Grandmother, Mary Hunt Minge Allen Jefferson.
She's the one who was the second wife of Thomas Jefferson's Uncle, Field Jefferson, that I've mentioned before.

I've got lots more notables connected with my Hunt and Allen lines to write about, all in the due course time.