Every year I keep a close eye on our monthly expenses and our monthly income.
Our income is mainly the salary my Hubs draws from his job.  We have money taken off each paycheck from the top to put into savings, before we even get our hands on it.  This money that's taken goes into various pots....life insurance, health insurance premiums, long term care insurance premiums, investments and retirement savings.  It's automatic so we are never tempted to NOT put it into savings.

Once the automatic savings amounts, plus taxes and medical/dental/vision premiums are taken out, it leaves what we get to "live on".  From this amount we budget for bills, both monthly and irregular bills(semi-annual, etc.) and our variable bills(like food, eating out, etc.)  Anything left over once our monthly expenses are paid, I put aside into a Savings Challenge.

For 2014 I am continuing my Yearly Savings Challenge.  I am raising the Goal amount slightly to $24,000 this year, $4K more than my goal for last year. 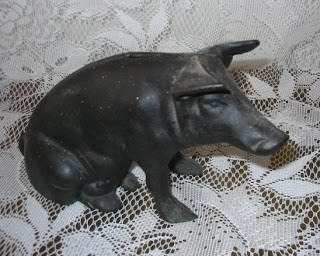 
I have posted my January End of Month $24K $AVING$ CHALLENGE Totals.
Check out the Savings Challenge page tab at the top of the blog for the specific numbers.

I have 2 goals each month.....
The 1st is to actually finish each month in the black and not the red.
The 2nd is to hit the targeted savings amount of $2,000.

I have to report that we finished up January with very little spare money to put aside.
The extra cash amount we ended the month of January with?.......$205.32.

Income
We had $142.78 left over from our income after our monthly expenses were deducted.
Other monies received in January totaled $62.54.  This brought us to our gain of $205.32 for January.
Since we have no debt anymore, this goes into savings.

Outgo
As for the expenses this January, here are the good and the bad side of things....

HERE are the BAD THINGS
*  The cable bill went up $5 per mo. after having been reduced by $5 for the last 6 months of 2013.
I believe they need to be called up and talked to.
*  The electric bill was $67 MORE than December's bill.  Ok, it's a Polar Vortex thing.
*  The garbage bill(which I pay quarterly)was paid.
*  An unexpected car repair bill of $982.59 paid in January.
*  Some extra credit card charges(store card & Hub's Discover) of approx. $94.
The Food Budget costs for January are in another post, which is located HERE.

Our new emergency fund is the amount we saved in 2013, which totaled $24,033.60.
So we are off to 2014 with a nice sized fund for all those nasty surprises that might happen during this year.
Looking ahead for February......

*  I will continue to do this Savings Challenge and report in each month on how it is going.
*  Hubs and I still need to sit down and go over how we did with the bills/savings in 2013 and see if there are any areas we need to cut back.

*  The car insurance is due in February and the bill is here already.  It's over $1600 for 6 months.
bleh.  We have been paying our oldest son's car insurance bill for the last 6 months(as he transitioned into the workforce full time and being on his own).  He was suppose to start picking up the tab on his share in February.  This might not be happening as he is looking for a new job and he may be unemployed very soon or even more underemployed than he is now.
If anyone wants to tell me that the economy is improving, just go tell someone else because I don't want to hear it! 8-(

*  February, historically, has been a higher expense month for us.  Besides 6 month's of car insurance being due, we usually have a fairly large credit card bill(that gets paid off) and of course, paying out of pocket for all medical bills still, since the deductible hasn't been met for the year.  And our deductible went up $1K this year so I am not very hopeful that February will end with us still holding much cash.  But there is always March and a new month to do better if February bombs out.
So how was your January financially?
Did you spend less than the income you had in January?
Did you stay within your budget or not?
Did you pay off any debts or put extra toward your mortgage principle?

If you posted your financial progress on your own blog, leave a link in the comments so we can go check you out your progress too and celebrate with you!

Sluggy
Posted by slugmama at 2:01 PM

Email ThisBlogThis!Share to TwitterShare to FacebookShare to Pinterest
Labels: $24K Savings Challenge, after your debt is gone it gets easier to save money for retirement, live below your means, putting extra money into savings each month