A Survivor's Story....Part Four, Nancy Has a Happy Ending

So Nancy Randolph, pariah of Virginia Colonial Society, set out from her homeland.
Nancy left on foot and went to her childhood home of Tuckahoe Plantation. By 1800 Tuckahoe was an abandoned relic of it's former glory.  Years later Nancy said she slept at Tuckahoe among the ruins for awhile before walking from one to another plantation in the area seeking shelter and food. She was taken in briefly at these stops before walking elsewhere.  She ended up at Monticello being cared for by her brother and his wife, Thomas Mann and Martha Jefferson Randolph, who lived there with Martha's father, Thomas Jefferson.

By 1808, wearing out her welcome at Monticello, she found a little money from somewhere.  Perhaps her sisters Virginia or Mary got their husbands to bankroll Nancy on this journey or her brother Thomas Mann Jr.  We will never know from whom but Nancy obtained the price of pass and traveled North, to New York City in 1808.

She was staying at a boarding house in Greenwich village when she ran into someone from her past.
That someone, who had been a friend of her long dead father, Thomas Mann Randolph Sr., was Gouverneur Morris. 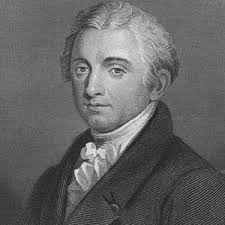 Born into a prestigious New York family he was the son of Lewis Morris Jr. and his second wife, Sarah Gouverneur.

He studied law at what would become Columbia University and then served in the provincial NY Congress.
His family's loyalties were divided once the revolution started.  He and his half-brother, Lewis Morris were for the rebels yet another half-brother, Staats Lewis Morris was a loyalist and a Major General in the British army.  After the Battle of Long Island the British seized New York City and Gouverneur's' mother, Sarah Morris, an ardent loyalist, gave the family estate over to the British for military use during the war.

Gouverneur Morris was appointed to the NY delegation of the Continental Congress in 1778.  He was on a committee to reform the the American military forces with George Washington.  He pushed for reforms to the financing and the training of the troops after witnessing conditions of the military during their Winter encampment at Valley Forge.  He signed the Articles of Confederation in 1778 and went on to serve on the committee that drafted the Constitution(and was a signer of that document as well).  He is thought to have drafted the the Preamble to the Constitution himself and is often called "the Penman of the Constitution".  He also helped draft the treaty that ended the Revolutionary War.
Afterwards he was an emissary to England then later to France, replacing Thomas Jefferson in that role.  He was in France during the French Revolution and kept a diary of that historical time and his first hand accounts of it.  Gouverneur criticized that revolution and the execution of Marie Antoinette.
Upon his return to America in 1798 he won a seat in the US Congress and served there until 1803.

Gouverneur Morris was a man of 55 who had never married when he had his chance meeting with Nancy Randolph in NYC.  Gouverneur is known to have had many affairs and liaisons, over the years, the most notably with a French writer, Adelaide-Emilie Filleul, marquise de Souza-Botelho(who's mother had been a mistress of King Louis XV)and an Early American Boston novelist Sarah Wentworth Apthrop Morton(whom he was sleeping with as late as 1804).

Gouverneur, one of the leaders of the American Revolution, remembered Nancy Randolph as a child(he was 22 years older than her)at Tuckahoe plantation riding her pony, shadowing her father and a grown-up Thomas Jefferson when he visited the family. They began a correspondence even after Nancy left New York to travel to Rhode Island, and then to Connecticut and found menial work there.

Gouverneur wanted to help Nancy in a real way other than friendship.  At that time Gouverneur had a hard time keeping a housekeeper(he thought them all lowly born and crude plus they couldn't get along with the chef and coachman he brought back from Paris with him)so he offered Nancy the job.  It was strictly an employer/employee friendship situation when Morris went to fetch Nancy from Armrstrong's Tavern in April of 1809.

But love seemed to bloom between them and Gouverneur didn't hold Nancy's checkered past against her, and 6 month after the employment arrangement Gouverneur Morris sent for a preacher on Christmas Day of 1809 and married Nancy Randolph on at Morris' estate, "Morrisania" located in what it today Bronx, NY, in front of confused and shocked Christmas day dinner guests there.

Evidently it was a good marriage for the both of them.  Gouverneur wrote in his diary upon returning from a trip to Albany, "Dear quiet, happy home."  Two years after wedding Gouverneur, Nancy gave birth to a son, Gouverneur Morris, Jr. in February of 1813.
Nancy Randolph Morris has landed in a soft, safe place and have the love and life she never thought possible.

Their happy home was shattered in 1816 when Gouverneur Morris, mostly retired from politics, died after accidentally causing internal injuries to himself(which led to infection), attempting to use a piece of whalebone as a catheter to clear of urinary blockage at the age of 64. 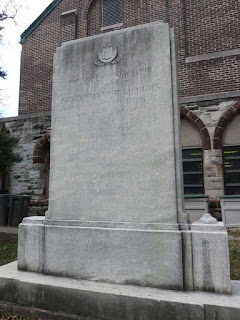 He was buried in the cemetery of St. Ann's Episcopal Church, the oldest church located in present day Bronx, the same chapel that was built on the family Morrisania land in 1841.  The Morris family crypt holds many Morris family members, including his father, Lewis Morris, a leader in the American Revolution and Governeur's half-brother Lewis Morris, a signer of the Declaration of Independence.

Ann Cary "Nancy" Randolph Morris raised her son, Gouverneur Morris Jr., as the widow of a much revered American statesman, and reigned over Morrisania until her own death in 1837.

But there is more to tell of this story next time in Part Five.