* Pay Bills  DONE  First thing I make sure gets done each month.  Don't pay your bills and you are in for a world of hurt.  I don't like to hurt.  ;-)

*  Read 1, 2 Books  DONE  The second book was monstrously long and I didn't finish it until 3 days into September but I am still counting it done. lolz 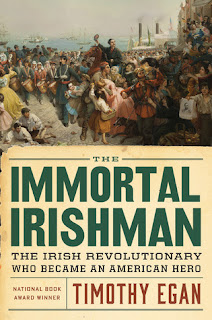 The first book was "Immortal Irishman" by Timothy Egan.  I haven't to this point in my life done much reading about Irish history, specifically about the 1800's and the time of the Great Famine and all it's fallout so this was a great place to start delving into that subject.  But that's just the beginning of the book!
Timothy Egan is a great storyteller IMHO and this was a great read.  I knew nothing about the person detailed within, Thomas Francis Meagher, before picking up this book.  Meagher lived about 4 lives during his time on earth.
The most interesting(oh to just pick one!)fact I garnered from this book was that Thomas Meagher had an unrequited love/infatuation with a woman named Jane Francesca Agnes Elgee while they were both a part of the Young Irelanders-a revolutionary movement in Dublin during 1840's/1850's.  Jame wrote under the psuedonym of "Speranza".  She would go on after this period in her life to marry Sir William Wilde, a Dublin ear and eye surgeon.  They were to become the parents of famous Irish writer, Oscar Wilde.
But I digress.......this is a good book about a fascinating person's true life, go give it a read. 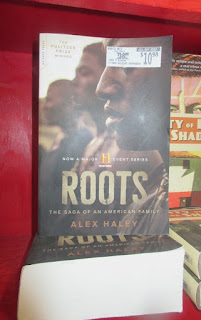 The second book I read was Alex Haley's "Roots".  It was a groundbreaking book back when it was published.  I, like almost everyone on the planet, had watched the TV miniseries they made from the book back in 1977 but had never read the book so I finally picked up a copy and did read it.
The tv show pales in comparison especially the original show from back in the day, which was jammed with "stars of the day" over quality of actors to tell Mr. Haley's story(such a bad tv production!).  I also watched the remake of "Roots" the tv show that the History Channel remade a couple of years ago and found it amazing how the two productions can be so different and take the story in unique ways that almost have nothing to do with the other and veer from the book quite a bit!

Anyway, I highly recommend this book and if you saw the original or the remake of the tv series try to wash that from your consciousness before you read the book.  It is a VERY long tome and at times your going will be slow as Alex Haley writes in the vernacular of his characters(especially slow I think if you didn't grow up listening to Southern accents and colloquial speech).  And I don't recommend this book because I have an ancestral connection to his family either.  It's a jolly good read......well maybe not "jolly" given the subject matter.  ;-)

*  Close CU Account  DONE  We closed out one of our bank accounts, the one at the Credit Union.  I always heard such good things about CUs so we moved our main account to one back in 2008-9 after the housing collapse/recession because away from a reg. bank that took TARP funds during the bank bailout.(It was Wells Fargo and you have all seen what a disaster they have been lately....)Anyway, this CU must have been a dud(unfriendly as hell tellers/staff, bad business hours, constantly sending us spam snail mail about loans/life insurance/etc.).  We also simplified our banking life by consolidating all our accounts/funds into one brick and mortar bank(we also have a few online banks).  We are quite happy with this decision.

*  Cash in Matured Bond  DONE  Another Savings Bond matured and cashed out.

*  Move Some $  FAIL  I am still waiting on Hubs to decide when to do this.  He keeps waiting for the interest rates to ratchet up again but I say just put it somewhere for now where it will earn something! Men.

*  Cell Phone  DONE  Got my new cell phone and I am still learning it.  What can I say?  I am an old lady who is set in her ways...lol 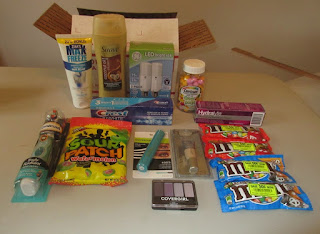 *  Harvest Garden  DONE  Lots of squash and tomatoes this month and I've put up 11 quarts of tomatoes, made 14 pints of relish and frozen some zuke too.

*  Survive the Heat  DONE  I've made it through August pretty much intact and the temps are slowing starting to go down which pleases me a lot.  I am not a hot weather gal, never was, never will be........

*  Survive the Rain & Build an Ark  DONE  And it's raining again today. as remnants of Hurricane Gordon depart. Ugh.  We'll get more rain next week from Florence's visit after she wreaks havoc on the Carolinas, et all.  No ark in sight.....yet. lolz


How did you do on your To-Do List for August?