My Adventures at the Hospital

Sorry I've been MIA mostly this week.
I spent yesterday walking around the hospital downtown while Hubs had out-patient surgery.
He had a growth on his neck removed which I've been nagging him for YEARS to get looked at.

And I also got to use my Arnold Schwarzenegger voice.....

I sat out in the waiting room for an hour before they let me go back and sit with Hubs while he waited to be wheeled into the OR.
And we sat.
and sat.
and sat some more. 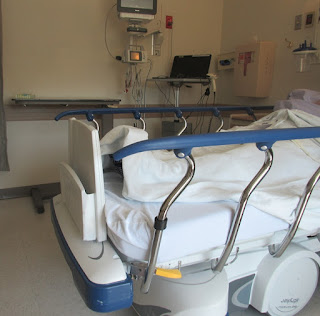 An hour and a half after he was suppose to be operated on one of the staff came in and apologized for the long wait and gave me 2 vouchers good for $8 in the cafeteria and/or the gift shop.  Since Hubs was about to be cut open and wasn't going to be able to eat I took both vouchers and at 11 am they finally wheeled him off.

We'd been there since 7ish am so I wandered off to find the cafeteria.  I ended up at the end of a hallway at one point(the signage was almost none existent sometimes).   This hospital was bought by the big corporation healthcare system around these parts and this building is old and has been renovated/added onto haphazardly(like most every other building downtown here)over the decades.
Hallways end abruptly and elevators open in the front or the back and some elevators only go to certain floors such that it seems like Daaedalus' mythological labyrinth at times....I felt I was going to find the Minotaur around a corner at one point! lol

Finally arrived at the "Southside Cafe" at 10 minutes of 11 am to find it closes between breakfast and lunch time and reopens at 11. sigh
So I parked myself in the vending area which was open and read some of my book.  After the "Cafe" opened I went in and grabbed a tray and tried to find something to eat for $8.  Of course the place wasn't laid out in any kind of methodical, logical way and no cafeteria employees were anywhere to be found.
I stood there with a tray and was awash with hospital employees flooding past me to grab food/drinks and queuing up at the register to pay and beat it back to their departments.  I walked around and found their offerings(no listings of what they serve/specials anywhere in one place).  The only sandwich(anything on bread)you could get was an Italian Hoagie which didn't sound good to me.  They did have a tuna salad served in a wedged tomato(came with a pickle wedge)so I got that along with a bag of multi-grain "chips"(some sort of healthy chip in a bag product).  The only drink products were bottles of diet soda(nothing regular), diet or unsweetened tea, water and diet Powerade.
My lunch came to $8.01 but they didn't make me give them one penny that it was over the voucher.

You could get hot coffee or tea but there were no sugar packets in the place.  There was also no ketchup in the joint(even though among the daily hot meal offerings was french fries?).  Evidently as I sat and read the signage in the dining area they only offer low/no-sugar/diet items so I guess ketchup is a no-go here. lolz
I haven't had the opportunity/displeasure of eating in a hospital cafeteria in many, many years so I don't know if this is the current trend in hospitals or just our corporate comglomerate healthcare system's idea.

So having kept down lunch(lolz)I started wandering back to the other end of the hospital where the surgery suite waiting room was located.  I got lucky and didn't end up down any dead ended hallways this time. Go me!
I passed by the gift shop and thought, "What the hell!  I've got time to kill so why not wandering around in there and spend the other $8 voucher." so I went inside.  Everything was overpriced and/or meaningless tchotchkes nobody needed so I figured I'd get $8 worth of cold drinks to take home for later.

Then I rounded a corner and spied a 75% clearance sign on a basket of Vera Bradley items.
EEK! 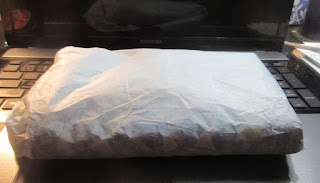 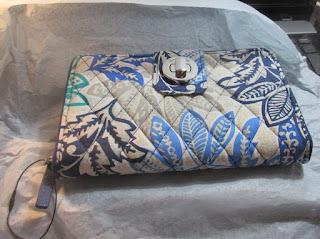 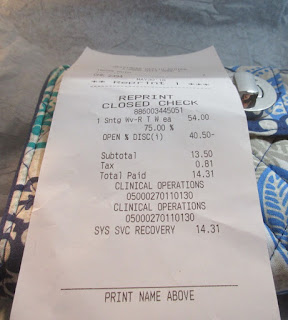 Now I love me some Vera Bradley but I don't need another wallet so this baby will either go into my Xmas gifting box for a few months or may go up on eBay where I can get $25-$30 easily for it.  8-)))

I made it back to the waiting room avoiding the Minotaur with my VB prize intact just in time to see "The View" was signing off for the day on the tv there.  I timed that excursion into the bowels of the hospital labyrinth well to avoid Whoopee and her gang. lolz
And the surgery board said that Hubs was still in the OR so I pulled out my book and read for about a half hour before the surgeon snuck up behind me and grabbed my shoulder and I about shit my pants he scared me so badly.
What medical school do they teach that technique in??!
Geez.....
So he had me go into a room so he could tell me how it all went(which was fine and you don't need nor want all the gory details I was made privy to). 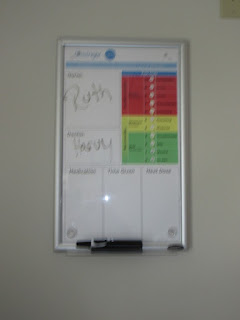 The nurses called me back about 30 minutes later after Hubs was coherent and able to talk.
We sat until he didn't feel woozy anymore and he drank something and they began unhooking him from the IV setup and going over the discharge stuff.
We got him dressed while I told about my journey into the center of the beast/building and pretty soon he was raring to go........ 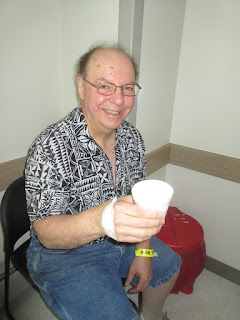 As soon as they found a wheelchair to wheel him out to the car since he was still unsteady on his feet and I just knew I'd be under the hospital in the dark parking lot alone trying to pick him up off the ground if he tried to walk out of there and passed out.

Got the patient home about 2 pm., put the dogs out, made Hubs some coffee and toast, ran up to Rite-Aid for his 4 Rxs, got him medicated and up to bed for a nap and then I sat and put my feet up for awhile.  I did no cooking last night(it was bad enough I had to do the dishes!)and ordered Chinese take-out and Ex-College Boy picked it up after he got home from work.
Hub is fine and home and on the mend(as long as I don't end up killing him because he is stubborn as HELL!)
Case in point, they had to intubate him for this operation so his windpipe is sore and swallowing food is rough.  He decided he needed a spicy food with big chunks of meat in it for his Chinese take-out even though I told him he probably wanted to get soup or something like it.
I think he ate two bites and decided this dinner wasn't happening and he had applesauce and ice cream later. lolz

Sitting in a hospital waiting for half the day is exhausting......who knew! 8-)

Sluggy
Posted by slugmama at 2:17 PM

Email ThisBlogThis!Share to TwitterShare to FacebookShare to Pinterest
Labels: out patient surgery, the Minotaur in the Labyrinth, unexpected find, waiting at the hospital