It's been a real mix of things here lately at Chez Sluggy.
Here's a rundown of the past few weeks.

* UGLY  Hubs had to go down to Louisiana and was gone 8 days.  Even though he stayed in the house while there it meant 2 nights of motel charges(1 on each of the way down and the way back), plus lots of money spent on gas and meals.  I did have a few fast food/casual dining gift cards he used and he made breakfast and some coffee at the house so it could have been worse than the $1100+/- it cost OOP for this trip.

* GOOD and BAD The reason for Hubs trip was to access the condition of the house there, clean a bit, fire our old realtor and interview for a new realtor and field some independent offers we got on the property, so that was good.
None of the independent offers turned up a sale so we signed a new contract once he got home and we got an offer with the new agent on the house last week.  Unfortunately, the financing for the people wanting the house fell through so we didn't sell the house. 8-(  But we have gotten a lot more traffic with this new realtor and that paired with a lower(more realistic)price may eventually get us a sale.  Sooner rather than later is my preference. ;-)

*  UGLY We have had 2 snowstorms in 2 weeks since Hubs has come back(plus 1  that arrived while he was gone), so I am blaming them all on him. lolz  And another Nor'Eastern is slated to hit mid week this week, which makes #4 though we aren't suppose to see much accumulation on that one, but still, it's the end of March for gosh sakes.....enough is ENOUGH!
March 2nd..... 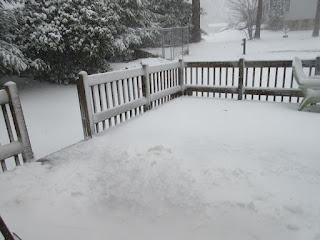 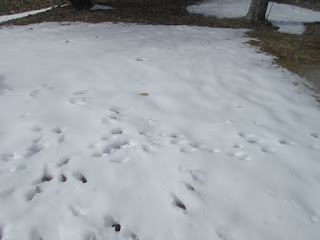 These tracks are much too large to be Chester's.
Then I spied at the top of the middle of this shot a strangely squared shaped track set apart from the other tracks. 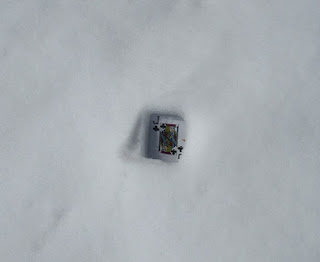 A playing card buried in the snow.
I guess our resident deer enjoy a game of Black Jack every now and again while traipsing through our development.  ;-) 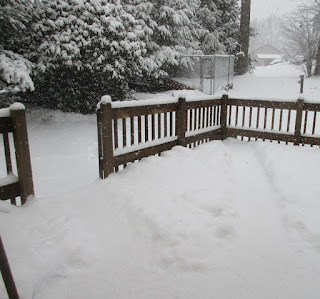 Hubs came home between the storms and was in charge of taking Chester out again...... 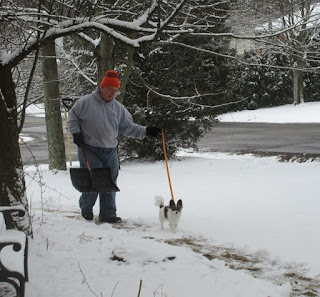 * GOOD On March 8th we finally were all well enough to go out to celebrate College Boy's birthday. 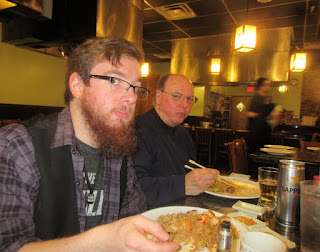 My kids insist on going out to expensive restaurants for their birthdays so this time we went at lunch time and paid lunch menu prices for the expensive Hibachi meal. 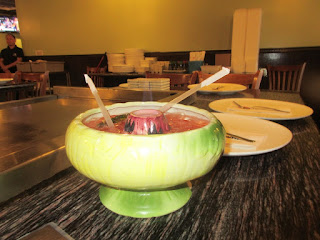 This is Daughter's idea of "celebrating".....a punch bowl full of liquor!  It came with 2 straws but she wasn't sharing it!lolz  5 types of liquor and gosh only knows what else was in that drink.  She let me take a sip and all I could taste was alcohol so it was light on the fruit juice. 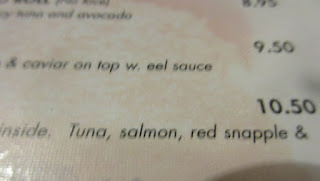 I passed on the sushi roll made with tuna, salmon and red snapple.....lolol 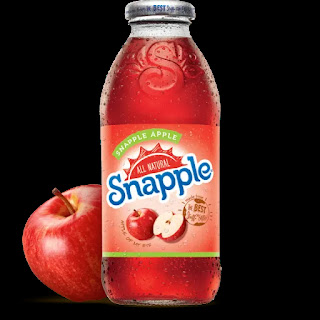 This hibachi master wasn't as crazy as the one we had back in 2011 for my Daughter's Birthday meal but this chef did have a special water bottle to put out the onion rings volcano........ 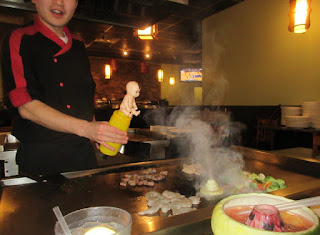 We mentioned that is was CB's birthday so they thoroughly embarrassed him by banging a gong at the table and we all sang "Happy Birthday" and he blew out his candle on his dish or ice cream........ 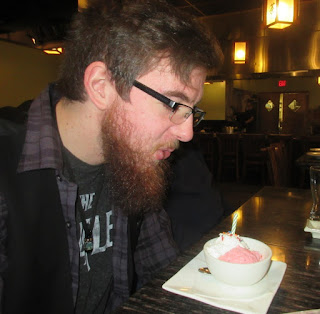 He finally got his Bday card and his check.... 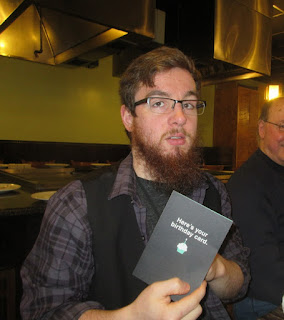 Then he posed for a photo with me before he left in a separate car to go to his internship. 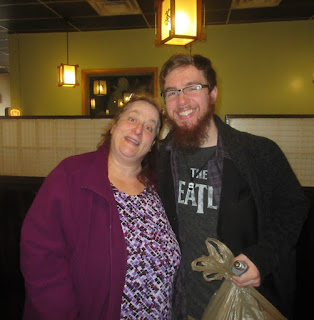 Can you tell from my face I'd had a bit of sake by this time? 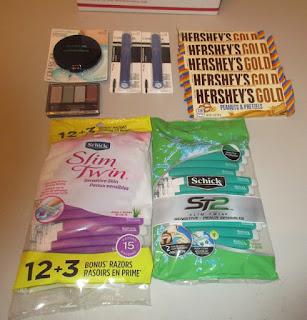 I hit Weis a week ago Friday for some deals and a Friday Freebie which I talked about already..... 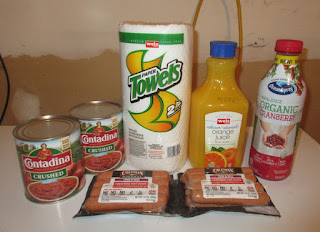 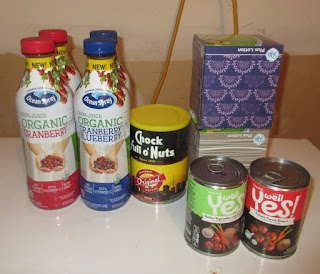 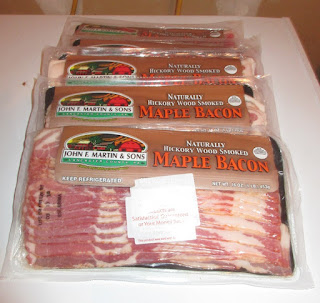 And I hit a bacon deal.  5 packs of John F Martin bacon(the local good stuff!)for $3 a pack after $3 off Instant Stickers on each.  These will go into the freezer for Summertime BLTs.  8-)))

I also bought a fair number of frozen entrees, ice cream(the kids are going through it at a rapid clip!), some Progresso soups for Daughter's lunch, soda 12 packs(stock-up price), devil dogs, pizza bagels, Power-ade, buffalo chicken bites and breaded mushrooms and chips for snacking for the kids, 2 cans of diamonds for snacking for me, some doggie treats for Chester, 2 packs of discounted meat, 2 boxes of muffin mix that was .50¢ after sale/doubled Qs, cole slaw cabbage mix and 2 bags of salad kits.  I also bought reg. milk, a full price container of sour cream(needed that night for our stroganoff dinner).
When that trip was said and done $241.85 if I had paid full reg. retail for all cost me $115.70 after sales and Qs(most doubled).
I spent a lot more than I planned(can I blame the discounted bacon??lol)but this week's shop should be a lot less.
Oh and since it was PI(e) Day on Wednesday I bought a pie............ 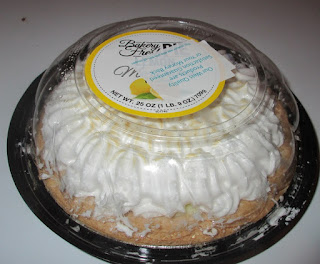 Lemon meringue for half price. lolz

* BAD And then I had my slip and fall Thursday which has curtailed any going out and spending $ up to this point.
Good think I got those frozen & prepared foods since I haven't been up to making meals since Thursday(though I am putting a corned beef into the crock pot today-a day later than planned).
I doubt I'll go to Rite-Aid this week other than for any Rxs as the deals are thin now and for next week too as far as I can tell.  I do need to get to Ollie's(Good Stuff Cheap!)in the next week or so as I have a 10% off discount card that is expiring the end of the month.

* GOOD  I was contacted out of the blue this past week by a 1st cousin 1 x removed on Ancestry.
Her mother and my paternal grandfather were siblings(making her my father's 1st cousin).  I had no inkling she existed because I never met that Great Aunt and didn't know she and her husband had had any kids!!  I don't think she knew I existed either until she saw the same people on my tree that are on hers. lol  We are emailing back and forth now and are sharing info, stories and photos(though she has a lot more photos of that part of the family than I do). 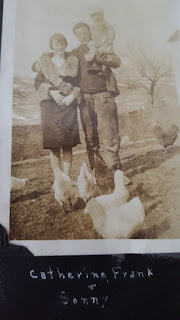 This is a photo of a photo she sent me of  my father with his parents(the baby in my grandfather's arms)I am guessing was taken in 1932 in upstate New York.  This is the oldest photo I have of my grandparents(as well as of my dad).
I'm looking forward to more photos and stories from my newly found cousin. 8-)))

That's about all to report in lately from Chez Sluggy.

What's been going on lately in your world?