First off, here are a couple of deals I got last Wednesday at Weis(PMITA)Markets..... 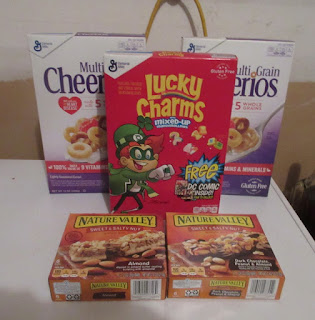 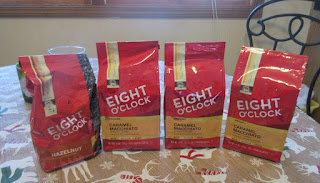 They finally had the variety of coffee I wanted back in stock so I used my rain check.

So on Friday, here is what we got in Thursday night's snow storm...... 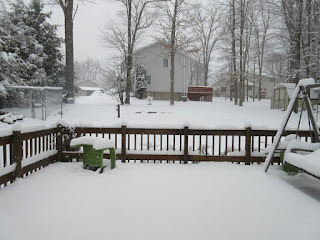 8 inches of the stuff.  Between Daughter and myself(and a little help from the sunshine we got after noon that day)we got the driveway cleared enough so I could leave to go get College Boy at 3 pm.

The region was set to get snow squalls and showers all day long.
I hit three separate snow squalls along the way, one was particularly bad.
8 miles from my exit I hit a white-out area.
WTF!  Blizzard conditions so bad I thought I was a dead woman in my little purple car.  You couldn't see the road, the edges of said road or the car in front nor behind you.
And pulling over would just guarantee you got hit by somebody who coudln't see you.
Talk about white knuckle driving!
So a line of cars with flashers on crept down the limited access highway going 20 mph for 8 miles until I got to the exit and tried to get off the road.
The exit ramp was even worse but luckily it was all downhill and got onto the road through town.

I stopped at the Walmart to pick up some supplies College Boy needed that I didn't bring from home to drop to his room(so we didn't have to haul this stuff back in a week when we had to haul him and all his crap back too). I got in a bit early and I also needed to get out of the car and walk around and try to get rid of the knots in my back and head from the tension from this drive.  I was just a frayed nerve at this point.

I stayed the night in his dorm room.  He has a double room but he never got a roommate so there was a second bed for me.  College Boy was reticent about me sleeping in his room until I put it this way....either I pay to stay at the local motel or I can use the cash that would go toward that bill to take him out since he is now legal drinking age.
Putting it that way made the idea of mom sleeping in his room more palatable.

And I requested that he PLEASE CLEAN HIS BATHROOM before I arrived so using the facilities wouldn't skeevy me out.
And he did!  I have photographic proof..... 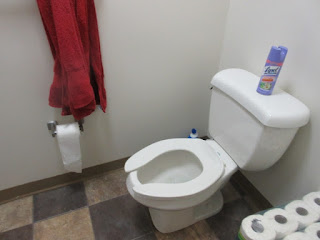 Just don't look too closely at the bathroom floor. lolz 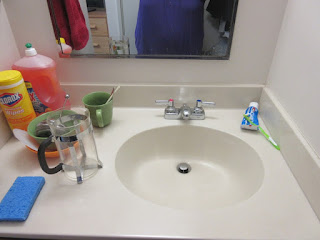 Here is the sink/counter after I attacked it three times with cleaner and bleach.
I neglected to take a "before" shot.  Just imagine this photo and the counter and sink it SOLID BROWN in color(I guess because the water has heavy mineral content there).
Seriously, solid brown, except for the backsplash.
And his toothbrush was sitting on that.
Bleck!
And yes I made him throw his toothbrush out before we left.

Oh, and his sink was backed up and not hardly draining so I asked him why??
See that French Press coffeemaker?
He's been pouring coffee grounds into the sink to clean it.
Hmmm, do you suppose THAT would have something to do with the lack of draining?!?

So I told him(why does someone have to tell a 21 year old this?  Oh right, he's male!)to put his grounds in a garbage bag and dump or pour his grounds into the toilet and flush.
An Call freaking maintenance to come fix his sink!

Young males.....what are ya gonna do, right?

So I took him out for dinner and a couple of drinks.
On the way into town we slid into an intersection past a stop sign.
This is because even though there were still students on campus until Saturday the school closed up at 4 pm for break so nobody thought it was a GOOD IDEA to plow the roads on campus.
I tried to stop the car just kept going.  Luckily for us there were only two vehicles approaching and not near the intersection and they were going slow and saw us slide so a collision was avoided.

We got back to the dorm safely and settled down for the evening.  I watched a little tv(he has cable)and he played WOW.
What a terrible night's sleep I had!  A should have known the dorm mattress was going to be shit but his thermostat is also malfunctioning.  It randomly resets itself to different room temps.  You set it for 68 F and 30 minutes later it's up to 74 F.
WTF?
Again, Call freaking maintenance to come fix the shit!!

I have decided to call College Boy "The child who does not make waves.".
He is an introvert by nature anyway but it seems he will put up with mounds of crap before actually drawing attention to something that needs fixing in his life.
Being me, I just don't understand putting up with stuff you don't have to.
Anybody else have a kid like this? 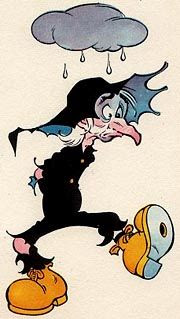 Moving on.....
We left before 10 am on Saturday and the drive home was not an issue however it was difficult getting OUT of the town his school is in.
Like Joe Btfsplk out of Lil' Abner comics, this town has a dark snow cloud overing over it all Winter long.

Once we got on the highway South of town, the sun was out, the roads were dry it was a walk in the park and a downright pleasant drive.
WTF?!?
We made a quick stop at Denny's along the interstate for a pit stop and drinks/light food and got home before 1 pm.

Sunday was a lazy day at home.  Hubs and I ran out to Kohl's that evening and got him & CB some clearanced duds and now I have $30 in Kohl's Cash to spend. rah.
We also went up to Maine Source(the restaurant supply place)for some groceries.  I had a $5 off $50 Coupon to use. 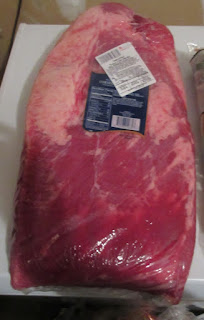 They had good cuts of Corned Beef for $2.99 lb.  Only thing is you had to buy the full piece.  This one was 13.34 lbs.
I cut this into two pieces and wrapped and froze one and put one into the crockpot on Monday and we had our Irish meal then instead of this Friday.
We'll have tons of Rueben sandwiches this week and next week of the leftovers of that one piece I cooked. 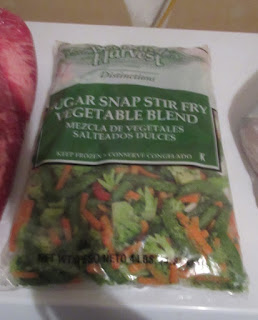 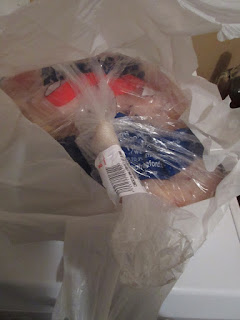 Rounding out my deals there I got this 9.64 lb. bag of boneless/skinless chicken breast.  I re-bagged this into meal size portions.
I spent some time Sunday reorganizing the chest freezer and seeing what I had to use for my meal plan this week.

I am so glad I went out to the grocery stores on Monday while the sun was shining.  I usually go on Wednesday(the last day of the sales ad)but with the forecast I figured I might have a problem getting to the store then so I went on Monday.
It was a madhouse would be an understatement!  I really didn't need to go but I wanted to get a couple of deals......... 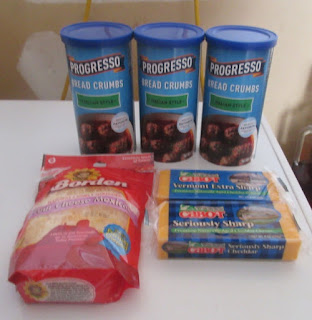 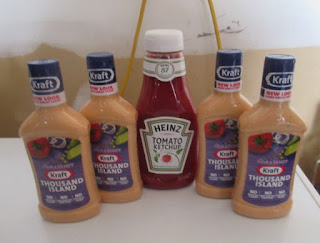 I also spied a birthday cake with a 50% sticker on it in the Bakery dept. since we hadn't celebrated CB's birthday yet. 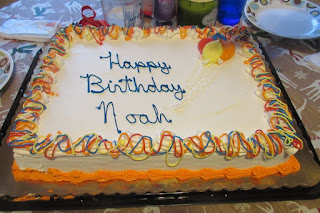 So Monday evening we had a traditional St. Patty's Day meal of corned beef, cabbage, carrots and potatoes, followed by the singing, blowing out of candles and eating of cake....... 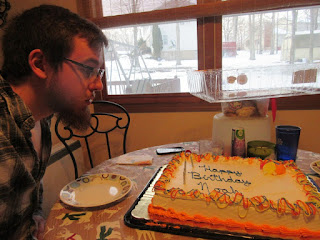 The blizzard started Monday night around 10:30 pm.  The snow was suppose to start at midnight or so.
This is what the back deck looked like at noon yesterday. 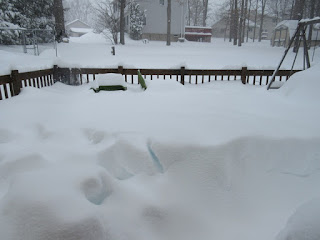 The Daughter took the dog out around 9 am and measured this crap at 24 inches deep.
Bleck!!!

It's hard to get a definite final total for the amount that fell yesterday as it's blowing and drifting but we had to have gotten another 3 inches before it finally stopped for good. 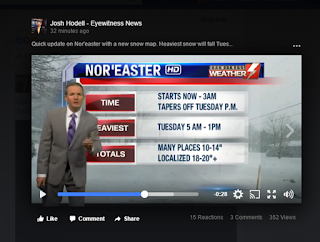 Here's a screenshot of the local tv stations Facebook report.  For once, this storm actually was bigger than they were predicting.

Where we use to live East of here in the Poconos got 30 inches but then again, that's typical for that area.
The weather talking heads on the local news said that this storm dumped the most snow in this area for any one day "event" since records started being kept in 1901.
yay......

So today is dig out mode.  College Boy shoveled out around the heating compressor yesterday and helped the Daughter dig her car out enough to get to school today(but they cancelled it for a second day in a row). 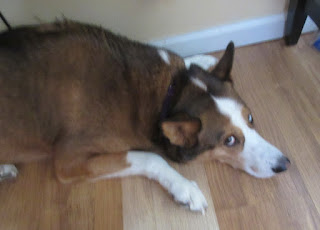 Here is Daughter's dog.  She is NOT  happy with the snow.  She is half Husky but she was born and raised in Louisiana until last June.  She just doesn't know what to do with this much snow.
A coating to 2 inches, no problem.  2 feet and she is hiding and refusing to go outside. lolz

I guess I'll actually go outside today, help supervise the kids shoveling and take some photos.

Sluggy
Posted by slugmama at 10:53 AM

Email ThisBlogThis!Share to TwitterShare to FacebookShare to Pinterest
Labels: almost grown kids, blizzard of 2017, grocery deals at Weis Markets, too much snow, weenie dog, what is going on here