I have never had the problems dealing with institutions of higher learning(aka universities)with my older 2 children as I have had dealing with them in regards to child number 3, College Boy.

The older 2 by their sophomore year were pretty much on top of things and I was on autopilot with regard to having to "deal" with anything concerning their schooling, other than filling out the dreaded FAFSA each Winter and writing the checks to fund said schooling.

First off he is so off in his own world that he totally missed signing up for Fall term 2015 classes last Spring.  He DID make it to "Make-Up Day" but some of the classes he wanted/needed were filled.
He also totally missed Housing/Dining sign-ups for Fall 2015 back during his Spring 2015 term.
Then he missed the Housing "Make-Up Day" altogether.  He says it was because he wanted to room next year with a particular student and then gave me a story about how they need to both simultaneously submit their info/choices to Housing in order to get a room together.
And of course, that didn't even turn out to be accurate.

Now these educational institutions KNOW what the brain of a teenage boy is like.....dealing with them on a regular basis, how could they NOT know this, right?
Yet they handle things in such a way as to set them up for failure with getting all this completed correctly and in a timely manner.

The first thing schools do is NOT allow access to anything concerning the student by their parents.
Who decided this was a good idea?  Especially since the vast majority of parents are footing the bills for these students!
I know it's a privacy issue but every acceptance letter to college should come packaged with it, besides the forms to start applying for housing/classes/dining and financial aid, a form for the student to sign to allow their parents access to school information.

I find it ridiculous that even though I am still legally responsible for this child and I am paying his freaking bills! that I am not allowed to see any information pertaining to him/his grads/his balances due unless HE shows it to me.  Or he signs something they keep on file at the school that gives me permission to even speak to someone in charge about his matriculation at said school.

We got a card from the school about 2 weeks ago informing us that his Fall invoice for school would be available online on July 24, 2015 and that payment was due in full(unless you opted for a billing plan)by August 7, 2015.  That's a 2 week window of opportunity and cuts it very close if you are an old fogey and mail a check rather than put this on your credit card or debit card.

So I try to go online and access the bill and hopefully just pay it electronically since it is faster.
But no, I can't access the bill.
So I have to find an opportunity when College Boy is awake when I am also awake and not practicing his instrument or rushing off to work his part time job.
Easier said than done I tell!

We finally are both free and awake on Monday his day off.  He has to go online on HIS computer since the school's website won't let him log in from my computer.
And I finally get to see the bill and save it to a flash drive so I can print it out forms from my machine.

But the Invoice/Bill says there is half of a $6,500 student loan applied to this bill!
A student loan nobody here applied for......
And to boot it is unsubsidized meaning interest accrues and builds as soon as it is disbursed. yuck.

College Boy looks at the loan amount and says that's cool and now he'll be able to spend more of our money of crap like pizza and going out at school.  I have to explain to him that an unsubsidized loan will grow as soon as you start the clock on this money and by the time he is in a position to start paying this back(and yes, YOU are paying this back, not your father and I!)after graduating and finding a real job, it will be far more than what they are loaning you.

So now I have to call the school and find out 1-why this loan is on his account, and 2-how to get it removed.
And when I called on Tuesday morning of course since CB hadn't signed a FERPA form to give us access to  his records they can't talk to me.  I tell her, "Well if you want to get paid for him to attend school there somebody had better talk to me about something because I pay his bills!" lolz

So she allows me to ask about this student loan issue and then informs me that Noah has to call or email a certain person in their Financial Aid office who handles the direct student loans and request that it be rejected.  I can't do this, even if he had signed a FERPA form.
So now it's on CB to handle this detail.

While nosing around on CB's online account at the school I came across an interesting item tucked in some corner of the site.
The reason we NEVER receive any paper communication from this school(other than this 1 card in the Fall and another 1 in the Spring)is because if you want paper communication you have to OPT IN!
So let me get this straight........you are only going to communicate with the bill paying parents electronically(unless you opt into paper communications which you never let us know we need to do this)but do NOT allow these bill paying parents electronic access to their student's information/account/emails.

Give it a minute to let that all sink in.

Is this all kinds of messed up or what?!?!

I just wonder how many kids show up for move-in day at college with their bill not paid and clueless parents? lolz

ATTENTION COLLEGES--Parents are old, old fashioned and use to PAPER COMMUNICATIONS for IMPORTANT STUFF!  This is how things worked in our world for forever.  We are not 20 somethings use to an electronic everything!
Make Paper the default and let parents OPT OUT if they wish.

So if this craziness isn't enough--now I have to deal with the Residential Life stuff of Housing and Dining.
College Boy's bill says he is on the 14 Meal per Week plan.  I suppose since he was on that one last year and he missed the sign-up/change date they just kept that one on his agenda.
We found that with his schedule last year that he was NOT eating 14 meals a week at the school's facilities.  We were paying gosh knows how much each semester for uneaten meals which drove me crazy!
So there was a 10 Meal per week plan and something called a 175 Block Meal Plan.  These 2 plans were within $2 of each other in price so the same financial outlay basically.  But of course the school's website didn't explain what the difference was between them besides $2.
After emailing the school last week and waiting a full WEEK for a reply explaining what makes these 2 plans different I finally did on Monday.
They both supply an average of 10 meals per week but if you don't use 10 meals a week they carry over into the following week, etc. until the semester ends on the Block Plan.
This will be a much better option for CB and will result in NOT wasting money on food he doesn't eat.
So we changed his meal plan and will save about $125 a semester(big whoop, right?).  This savings I can use to throw some money at him if he runs short of $ for food during the semester if need be.

Then it was on to the Housing issue.
He had finally selected a room option in May and luckily they still have available units(even though the sign-up deadline was long past).  And they had paired him with a suite mate and he isn't rooming with this frat brother friend.
So I ask about making a change to a room with said frat brother.
Housing would have to move him out of his current suite and put him in a vacant suite(if they can find one of the option he chose).  Then this frat brother has to request being removed from his current room and put into the CB's new room.  This would be problematic at best seeing as CB would have to get in touch with frat brother in the next 2 week's and get him to handle the request on his end.

But then when the Housing person looked even if they want to try to get this changed they can't because frat brother's parents are paying for a cheaper/different room option.....so frat brother would have to have his parents cough up more cash for the upgraded suite to make this even possible.
So at least we know and CB can get his sulk over this glitch in his plan out of the way before he shows up at school.

So I have mailed out the school payment this morning and am waiting on CB to call the Financial Aid Office to get the loan removed and for the school to correct the bill.  Worse case scenario(other than if the loan co. disburses the money to the school before Financial Aid contacts them)the school says that I have overpaid CB's fall bill.  I can live with that for now.

And we won't be filling out a FAFSA this January for CB's Junior year.  It's just a waste of time on our part seeing as "we are rich" according to the government.
Senior year he will need to take out some loans especially if he has to do an unpaid internship and live on his own in an apartment, somewhere in the country outside of where his school is located for that.
But until that is needed we are opting OUT of FAFSA. 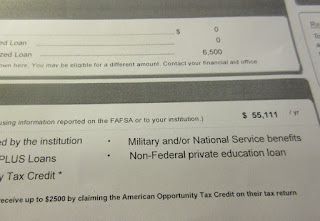 CB thus gets nothing for school....no financial needs scholarships, no subsidized loans or state grants.
The only tax benefit we get is a possible $2500 back for the American Opportunity Tax Credit when we file our taxes.
Oh boy......

So if you want some fun and entertainment in your mundane life, go sent a kid off to school.  It's better than a video game.
Though buying a gaming system would be a helluva lot cheaper!

Three more years of this stuff and then you can stick a fork in me and call me DONE!!!

Email ThisBlogThis!Share to TwitterShare to FacebookShare to Pinterest
Labels: college bureaucracy, dealing with colleges, FAFSA is a waste of time, ferpa waivers, financial aid, schools not communication with parents