It's the "Traveling Circus" Edition-- 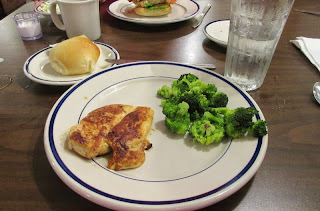 Here's a shot of my dinner last night.....that plus a small side salad.  I tell you it was an effort just to eat this last night after the day I had!
Oy......more details about that in the fullness of time.


Anyway, onward to the meal planning!
Here's what was planned last week.......

Everything went as planned.

Yes last week was bad BUT......it was getting a lot of good deals, stocking up on things College Boy will eat(that I don't usually buy now) and I TOLD YA it would be a bad month for the food budget before we started May.
The good things are-groceries won't be bought the next 2 weeks and I earned $20 in Store Scrip this month for buying things like charcoal and trash bags that we did need anyway.
Ok, enough of my justifications.....

I had 0 transactions at Rite-Aid last week and spent $0.00

$504.10(plus $11.67 at R-A) spent of my $? May food budget.  I think I am done buying food/toiletries for May now(except if College Boy picks up milk or something but I can't think of a thing we don't have other than milk now.
We should be good until June rolls around.
I did leave him basic foodstuffs and pizza money so it's all good. 8-)

We have cleaned out the leftovers other than things CB will eat(which isn't much in the leftovers dept.) so I don't plan on coming home to any food waste. *crossing fingers*

There is no plan for the next 2 weeks but I'll share yummy stuff we eat while away instead.
Now doesn't that sound like fun? lolz
What is getting fixed and served at your house this week?

Was last week's plan successful, did you go off plan or did you not even plan what was going to be eaten that week?

Sluggy
Posted by slugmama at 8:20 AM

Email ThisBlogThis!Share to TwitterShare to FacebookShare to Pinterest
Labels: eating sensibly, food planning, make a menu to guide your meals for the week