He Has Already Checked Out of High School 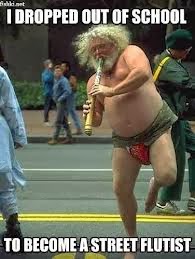 It's been a good few days here at Chez Sluggy.
No, I am not talking about the snowy weather....Lord knows that is pretty but a bear if you have to go out in it....plus it's too danged cold for me this year.

I am talking about #2 Son here......he's had a good few days.
And you know what they say--If your teenager is happy, YOU are happy.
Or rather, YOU are relieved that you don't have to deal with as much drama, eye rolling, 'tudes, obstinance, defiance, and the like.

#2 Son had 2 college auditions this past weekend.

While many college-bound kids this time of year have already completed their applications and some even HAVE heard back on whether they are accepted or not, if you have an artistic type kid, they are still in the throes of the process.
Among the many hoops the college "dog and pony shows" make teens jump through, the art(fine, music, theatre, dance)student has an additional hoop to tackle--the Audition or Portfolio Submission.

#2 Son got 1 acceptance letter weeks ago(about 3 weeks?)from one of the four schools he has applied to.
One of our fine state schools, Mansfield, welcomed him into their fold, even before he had an audition.
Of course, this was just a general admission to the University, NOT an offer of a seat into their Music program, which is why he has to audition.
So even if he isn't accepted as a Music major, he can still go here as some other kind of major other than a Music one.  This was NOT welcomed news to #2 Son at the time.  He's an "all or nothing" type of fellow. 8-)

This weekend began the month long audition process for #2 Son.  He has 4 auditions at 4 schools spread out over the first 3 weeks in February.

Saturday was the first, at Temple in Philly.
I was so anxious that it go well, being the 1st one AND the fact that Temple is his #1 choice at the moment.  It is also the school with stiff competition and not exactly a sure thing for him to get in.  He has the grades but his SAT's aren't the best and the music program is tough to get into.

His dad took him on Saturday and #2 Son thinks he did well and he came home with his spirits high.
Nothing more to say here as nobody gave him any indication on whether he gets the "thumb up or thumb down" on admission here.  We just have to watch and see what arrives in the mail.

Then on Sunday, they left for an overnight to that state school I talked about earlier, Mansfield University, so they would be there Monday morning for his scheduled audition for that school's music program.

While it's a state school with rolling admissions(not exactly tough to get into academically), reading about this school's music department online got me nervous about his odds of making it.

From the college's music program website.....
"We target enrollment for every studio, with an average of four or five seats opening up in each studio annually. Our average freshmen class is approximately 70 students."

That means each year they take 4 or 5 freshman per instrument and the music department's freshman class is about 70 in total, from a pool of about 300 applications.  So #2 Son had a 30% shot at getting in but that could be made better or worse depending on how many of those 300 others prospective students want to study flute.
And flute tends to be a very popular instrument for study. 8-(

So I crossed my fingers for him and waited until Hubs called me when it was over and they were on the way home.

#2 Son feels very positive about how he performed at this audition as well.
It didn't hurt that I let him attend the Summer Music Performance Camp they held last year and he worked with the Chair of the flute program then.  Plus she remembered him from that.

#2 says that they had a conversation and things were said to lead him to believe that he should be expecting a FAT envelope about their decision by the end of March. ;-)
I so hope that's true for his sake.

Which now means, going into the last 2 auditions #2 Son possibly has one in the proverbial bag already.
Though it's not his first choice if he gets into all 4 schools.
That would be Temple....at least it is, this week.
Next week?....who knows?! 8-)

So in 2 weeks Hubs takes him down to Richmond to his audition at VCU.
Virginia Commonwealth U. has what is considered one of the finest arts programs in the country at the moment.
It is his stretch school so we are just hoping for the best there and I'm hoping no matter the outcome, he has a positive experience.

Then a few days later it's time for #4 on the Audition Hit List at a local private school, Marywood University up in Scranton PA.

That's his "safety school".....sort of.  But we have hit a complication snag of sorts there because #2 Son doesn't "test well" and they are quite arbitrary about their statistical "requirements".  He wants to be a music education major at that place, however the education department has decided that he is 20 points from an arbitrary SAT score and will not admit him as a freshman education major...even though he has a 3.75 in his high school academic work.  He would have to go in as a music performance major and after successfully completing his 1st semester with a 3.0(B) average, he could transfer into that program and change his major.  So basically he has to prove himself because he doesn't test well on standardized exams.

#2 is NOT thrilled by this and I just rolled my eyes.

Between this "wrinkle" and the fact that he would have to live at home(what 18 year old wants to hear that?!LOL)to be able to swing this college financially, Marywood is on the bottom of his Favorite's List.
Can you blame him? ;-)

At any rate that is were we are with the Audition process at the moment.

#2 Son is having a hard time staying focused on high school at this point.  He has already checked out of high school emotionally.  He's spent a lot of time dealing with working on his pieces for these auditions, in addition to 2 school bands(concert and jazz)rehearsals, his garage band in his free time, plus keeping up with private flute lesson work.  Plus he had District Band auditions and practicing for that thrown into the fray!

He's having a hard time concentrating on his academic high school work now too.  He just wants that be done already, even though we keep telling him he has to "run through the tape" and not just meander up to the finish line to his high school diploma.

He is SO ready to just get on with the rest of his life, no matter where he ends up going and what he ends up doing.

I am ready too for him to be in college I think(living AWAY from home), if I don't think too hard about all that money we'll have to pony up when he goes.
Yes, we will get to spend a lot of money so he gets a degree that guarantees that he will be unemployable.  ;-)

Now it's time for me to get that FAFSA done, though in our case, it IS rather pointless......lolz

Email ThisBlogThis!Share to TwitterShare to FacebookShare to Pinterest
Labels: college auditions, flute concentration, getting into a college you like, having a good music audition, Mansfield, Marywood, music major, my son's college plans, Temple, VCU, wishes he already left high school