On the Dining Table This Week

The "Will the Health Issues Ever End?" Edition.......
It's a month now since the blood clot was discovered and I am so OVER it and all this testing and pills I need to take.
Now the dr. thinks I have podiatry problems that have nothing to do with the clot so I am off to a referral to a foot dr. as soon as they can fit me in.
Fun times!
For now I am off my feet so meals will be a bit weird, since Hubs has to pitch in...... 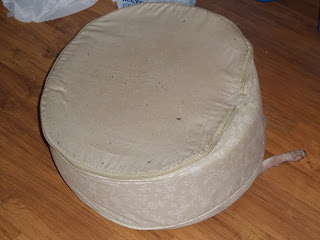 The Chihuahua has turned her bed upside down but is still laying in it peacefully.  That little thing sticking out on the lower right side is her leg.
She is a nut....


Here are the meals that were planned last week--

And here's what actually got eaten--

Everything as planned except no Beets on Friday(Sugar Snaps instead) and I didn't make the Broccoli Soup until Sunday afternoon, so we had leftovers and a frozen pizza.

As for food waste, we had to throw out a bit of halushki that didn't get eaten in time. 8-(

Leftovers going into this week--meatloaf, roasted potatoes, rutabaga casserole and lobster(which I will make lobster rolls with).

On the shopping list......I have everything I need to make these meals.  Not sure if my foot will be well enough for me to make them all, but I will try.  I'll need fruit, lettuce, veggies, milk, lunch meat plus will buy a few things ahead that count toward the Thanksgiving Certificate at one store.
$50 should get me what I need/want to buy.

That's what's appearing on the kitchen table this week here at Chez Sluggy.

What's getting fixed and served at your house this week?

Sluggy
Posted by slugmama at 10:07 PM

Email ThisBlogThis!Share to TwitterShare to FacebookShare to Pinterest
Labels: make a menu based on what you have and items on sale at the store, meal planning, using foods in your house already, what I am making for dinner this week