Chez Sluggy as a Vacation Destination--Part 2......Long but Picture Heavy

If you didn't read Part 1 of this saga, go HERE to check it out first.

On Friday....oh we had some fun on Friday!
The one activity I mentioned, among them all, that lit a spark in Tanner was the one with trains.

Steam Town is an old rail yard with a train turntable and train houses/sheds that they've preserved.  They have exhibits in the train sheds as well as actual train engines from various periods of rail history there.  They also have a piece of the train line tracks still in place and they give train rides of various lengths during the day.
We made it there in time for the last short train ride of the day!

Since Tanner works in a train related industry, she really dug Steam Town.
I mean dug it like a 4 year old boy!   *Not that she IS a 4 year old boy..... 8-)
Seriously.
Loving.
Trains. 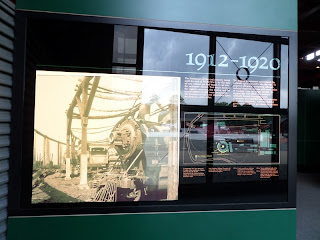 Me? I had enough of trains for a lifetime, having a train obsessed son who had every word to every Thomas the Tank Engine video or PBS tv show memorized and liked to recite them constantly one after another on a daily basis from the time he was 2 until 7 years old.
So.
Over.
Trains.

But even old jaded me found it thrilling to see the real thing up close and personal either sitting in a train car being pulled/pushed by an engine or watching an engine scoot by and being close enough to reach out and touch it.
And Tanner was a great companion to have along for this excursion.

Here's shot of an engine in the yard.  Old 514 is a diesel engine and it was to be the engine that pulled our cars on our little ride. 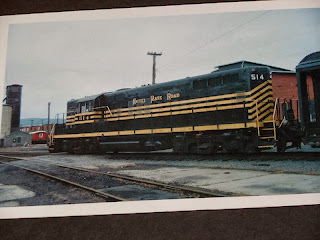 Here's a brief clip of the Park Ranger trying to talk over all the rude passengers who can't seem to keep their mouths shut long enough to LEARN SOMETHING.....ggggrrrrrr.....


Here's another quick video before the ride began..... 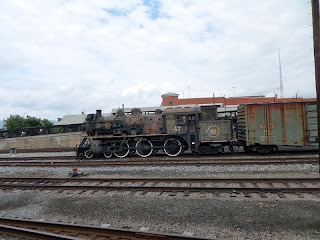 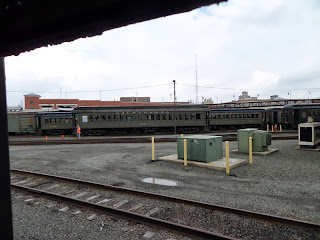 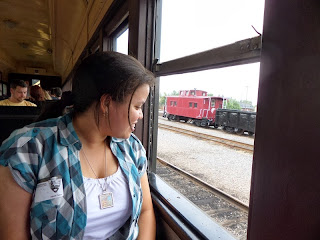 T enthralled as we pass another train with a caboose sitting on another set of tracks. 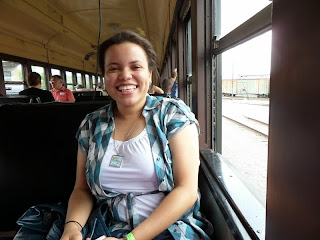 After finally getting T's attention......lolz 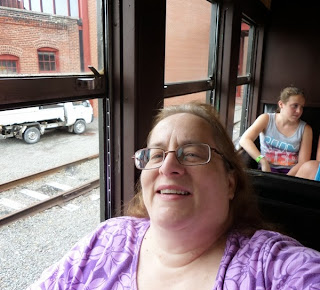 Me trying to get a "selfie" shot. 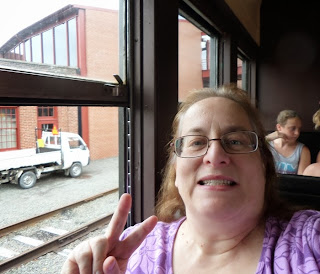 Me again, take 2 of the "selfie" shot.  Gawd!  Throwing a peace sign and smiling gritting my teeth! lol 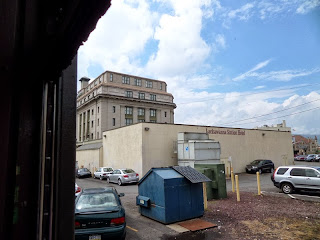 This is my *favorite shot*-note the high degree of sarcasm.  The set of tracks we took runs past the old Train Station which is now a Radisson Hotel.  It displays French Renaissance style architecture, having been finished in 1908.  Of course my shot is of a back employess parking lot and a big blue dumpster.....with the station/hotel in the distance.  8-P

A History of the Lackawanna Train Station is located HERE if you are interested in learning more about it and seeing much better pictures. lol

And here is what is written on the train car overhead as you exited the front car after our ride.....like I would even CONSIDER doing that......

I made a couple of short videos of one of the engines being taken to the turntable and being turned and then run back down the track to get it ready to hook up to some cars for the weekend longer ride to Moscow PA.

First up is the video were I thoroughly EMBARRASSED the hell outta myself.
As I was watching the engine come down the track onto the turntable I was looking through the camera's view finder so I didn't see the Conductor standing on the outside of the engine as it went by and I was being silly and cute and all and talking TO THE ENGINE and oh my!.....Open my mouth and insert a foot or FOUR!
Just watch it and you'll see how bad what I said sounded.....

I swear you can't take me anywhere!! 8-P

And here are the rest of the train videos......


And here is the video after T told me I had embarrassed myself propositioning the Conductor.....


And here is the last video, the one where I called the Engineer the Conductor.....doh!
I guess after 14 years, the time since my oldest son was gaga for trains, I haven't retained much of what I learned. lol

Then after the thrill of watching that big engine move about, we climbed up on the outdoor platform and took a couple of shots.... 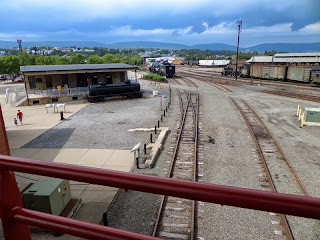 They were bringing another engine back from the line, having switched it to the yard line.  The smallish building on the left is now the Gift Shop. 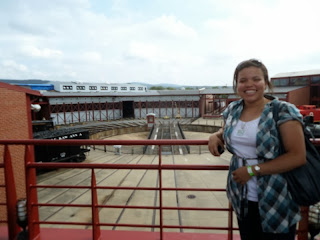 And a shot of  T with the turntable and sheds in the background.  I think she needs to blow this one up, frame it and put it on her desk at work!


Then we went inside and checked out the exhibits..... 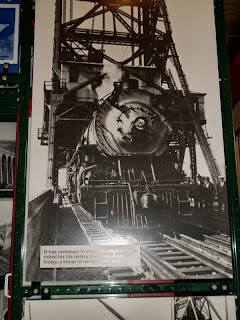 Then we walked to another building and Tanner had to sit down and rest for a bit.  She wasted that pose since no dating prospects were around.....hehehehe 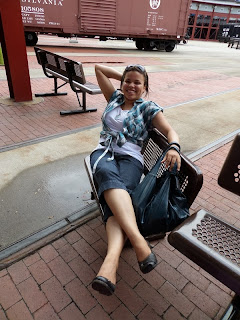 Sluggy the Eastern European peasant immigrant with her parents so happy to be in this brand new land.... 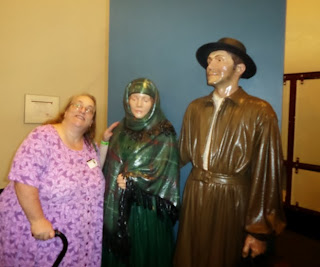 And when I couldn't talk T. into sitting on the conductor mannequins lap and playing "nice" with him, I got fresh with a hunky porter....... 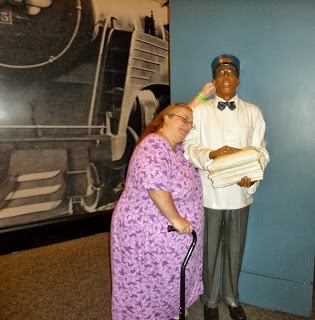 Funny but he was real standoff-ish and didn't cotton to my advances, even when I tickled his ear.
He was all business.
Some men......

After we closed down the Park(I think we were the last ones to leave that day!), we headed over to Friendly's for Lunch....Dinner....LINNER......

And of course, there was ice cream. 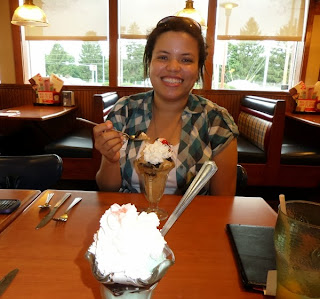 Hhhmmmm.....this seems to be a recurring theme for this visit..... 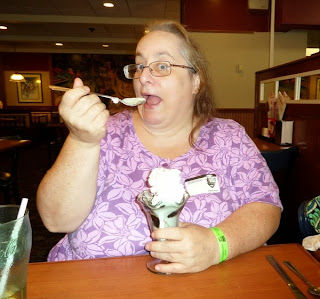 
Later on that night we sat out at the fire pit and started a fire.
And I learned that T has pyromaniac  tendencies.......
Yep, the girl likes fire!
And likes to catch small sticks a light and write in the air with them.
But then again who doesn't like to do that?? ;-)

On Saturday we had a nice picnic lunch and then had a surprise Birthday cake for T.  I know I shared it in August but here it is again if anyone missed it the first time around on the blog..... 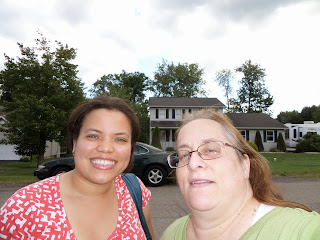 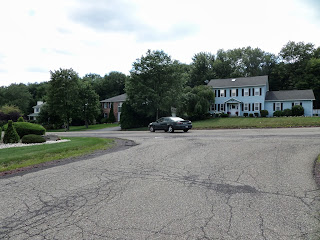 Thanks for the good times T.  And maybe it wasn't too too boring and you'll want to come back again sometime.  ;-)

Sluggy
Posted by slugmama at 12:00 PM

Email ThisBlogThis!Share to TwitterShare to FacebookShare to Pinterest
Labels: being silly, having a fun day out, ice cream again, our visit to Steam Town National Park, riding on a train, Tanner visited me, trains galore