.....or does anyone else think that the Coupon inserts for the last 3 months or so have been one big SNOOZE?

Not only are the values pretty low on most coupons but there are NOT a lot of coupons for food!  9 out of 10 coupons are for HBA or other non-food products.  And most of the food coupons are for junk food!  Well, there is ALWAYS a high proportion of junk coupons anyway....

Or is it just that manufacturers hate my region of the country and won't give us useful coupons in worthwhile denominations?  (Except for those toothpaste coupons which we always get tons of and for large amounts....)

Or am I just a whiney, unsatisfied, bored woman who enjoys complaining? lol

This time last year I was in my glory with the awesome sales and multiple catalinas at Acme(though I did have to travel a piece to get to an Acme)....

And here's just 1 WEEK of my haul during the multiple Double Coupon Events at Kmart last year.
From Aug. 16-22..... 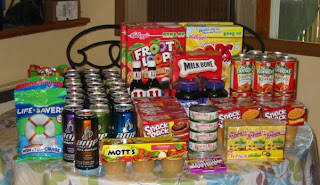 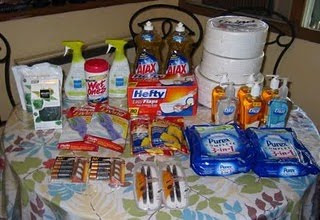 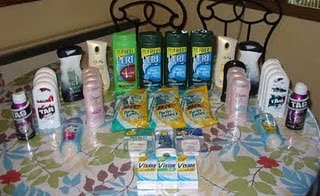 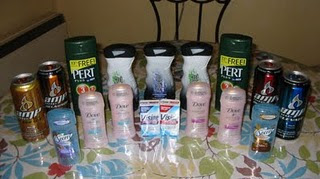 Total spent $16.86 OOP for $585.50 worth of items.  And that's not counting various manufacturer's rebates, free movie tickets, etc. I earned.  I logged a lot of hours inside my local KMarts last year....this year I think I've been there twice to buy clothes for assorted kids and haven't used a single coupon there.

Of course, some of the products I bought last year we've since sworn off of.....like Pop-Tarts, paper plates, pudding cups, house fragrance thingys, energy drinks, etc. so if I was to redo these trips there would be less bought.

I look at these photos and get nostalgic for the hunt & the thrill.....who says frugality is dull?

And then I remember how tired I was after those weeks were over and I get an overwhelming urge to go nap!lol

Last year was all about multiple large trips concentrated into 1 week.   The Acme trips were made in 2 days, going through the register up to 9 times in a day....it was truly a full day's worth of work planning and executing.  The KMart trips were spread out over a week's time for each Coupon Event Sale, but I'd make 2 or 3 smaller trips a day and sometimes hit multiple stores in 1 day.  Both methods were tiring and intense, but after the 2 days or the week of trips I could go for weeks and months without shopping(besides picking up a few necessities during any given week).
If I had to label it, last year was the "Year of Manic/Depressive type of Shopping".   Immense hauls in a short period and then no shopping for long stretches in between....if you don't count Rite-Aid.lol

This year has been about more frequent very small shopping trips for deals and catalinas.  My local stores haven't had anything approaching Acme or KMart deals of last year, nor has Acme or KMart. These little shops haven't been as lucrative as the mega-shops or as exciting, but they also haven't worn me out or taken the hours of strategic planning(=hours out of my day)either.
Weis would run 1 or 2 Cats with some things I wanted(ketchup or cooking oil or dog food, etc.) but usually there were no good coupons to pair with the Cats(or the Coupons would come out the week AFTER the Cat deal) so you would still have sizable OOP even after rolling the Cat a few times....thus higher OOP, so you don't stock up on as much.
You'd still get a deal but not as good as those megas of last year.

Since I have a stockpile, I guess I'd be happy with the type of shopping of this year(smaller hauls and a bit more OOP) as long as a big honking MEGA haul opportunity rolls around 2 times a year to augment my usual shopping.

So what do you prefer?
Those large shopportunities spread out over the course of a year or smaller cat deals more frequently during the shopping year?

What have your shopping habits been like this year?
Have they changed since last year?
What kind of deals would you like to see that you don't?
If you use coupons, are you using more or less than you did last year?
Are you buying different products from what you bought last year or about the same?

Can you tell I am bored and avoiding doing what I should be doing today?lol

Sluggy
Posted by slugmama at 1:49 PM

Email ThisBlogThis!Share to TwitterShare to FacebookShare to Pinterest
Labels: changes in how I shop, coupons, shopping styles, stocking up