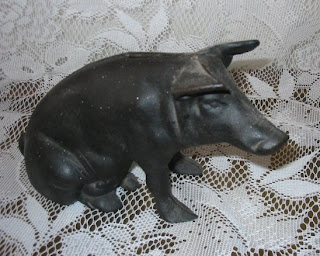 Since we are more than half of the way through 2010 I thought I'd update my list of Goals for 2010 from this post Here.

2. Pare down the stuff I need to eBay by sending more of it to the Thrift Store or sell it on Craigslist.
--Get off my rump and get stuff SOLD!  And what I can't readily sell, send it off to a Thrift Store.  I have had enough of boxes of crap hanging around my living room.  It's time to actually USE that room in the manner it was intended.
IN PROGRESS/ON SCHEDULE...I worked on this goal fairly diligently for 2 months this past quarter by selling some things on eBay and I sent 6(yes I said SIX!)loads to the Salvation Army last quarter.....3 in April, 2 in May and 1 in June. That's 213 items donated to charity!

3. Get rid of my last storage unit!
--This goes hand in hand with #2 above.  If all the crap goes, I won't need to pay for a storage unit any longer.  I went from 2 to 1 units last year.  It is time to let this one go as well.
UNDONE!
I threw the extra toiletries that didn't sell at the flea market in May into the storage unit.  #2 son and I repacked things into smaller boxes and organized so that come Sept it will be easy to load it all into the van and head to the flea market.  We also moved all the paper goods stockpile into the garage.  Once the weather cools down I can go back over there and work on whittling down the stash some more.

4. Plan and implement my garden better so I have a chance for it to be more productive this summer.
--Last year's garden was lame.  I need to be more proactive and get things planned and going earlier this year for it to be successful.  Every bit of work you put into a garden will pay dividends in increased health from eating better and  money saved on food spending.
DONE!!!
I did succeed in getting #1 son and DH to help me with getting the gardens up and running in May.  We've been pretty successful with how it's doing this summer, knock on wood!

5. Do the taxes and complete paperwork for #1 son's schooling.
--This will be the first Hope accomplished as is needs to be completed by mid February.  It could also be a big PITA as we have added tax implications for 2009 due to an estate/inheritance issue.
DONE!!!

6. Decide on and install a hew heating system for the house before the rate cap expires and heat is needed this fall.
--This one is VITAL and it must be completed by September!

UNDONE!
Ok...I am way behind on this one and it won't get completed in time.  Actually, this goal has changed due to changes in the BIG PLAN for our life so this goal needs modifying.  To be explained in a coming post.

7. Rethink how and how much I coupon/rebate and reorganize my freezer/pantry/stockpile.
--With my 1st year of extreme couponing and stockpiling over, now is the time to step back and see what I did well, what I need to improve upon and what needs to go.
DONE!!!

8. Continue to meal plan and retool our diet, including cooking from scratch/semi-homemade.
--This will involve making better choices with food, will depend partly on how successful  #4 is, and will  require all of us to change some old habits.  It's probably going to be the most difficult Hope to accomplish.
DONE & IN PROGRESS!!!

9. Decide on and complete 1 major house remodel project.
--Once we decide what it will be, it's just a matter of pulling the trigger on the job, as the money is there waiting to be spent thanks to our savings challenge of 2009.

UNDONE!
We are still wrangling over how much to spend/what to do.  At any rate, we are not under a weather deadline as whatever we do will be an inside project.

10. Complete all the unfinished craft and sewing projects!!
--This Hope is my own personal one that doesn't involve any other family members directly.  I need to just put my head down and plow through all these started projects OR make a decision to release them to someone else who wants to complete them.  This should take a good part of the year to accomplish.
UNDONE!
I have gone as far as uncovering the storage tub with some unfinished projects inside.  Ugh!  This is SO far from done....lol


My Plan of Attack for the rest of August & Sept.--
I'll be doing some additional organizing in the garage as well as preserving food by canning and freezing.
As the weather dictates I'll attempt some more cleaning out of the storage unit and sending stuff to Salvation Army or setting aside to donate to a local fundraiser.
I'll be going back to the flea market to sell more of the excess stockpiled toiletries in Sept. plus I'll be getting back into eBay again.
DH & I need to re-evaluate Goal #6 & #9 so those are on hold. I'll expand on this in a later post.
Along with all this, I'll be keeping up with the garden, keep putting money away into savings, and continuing to cook more from scratch.

How are you doing on your Yearly Goals?
Let us know what you've finished or started so far this year.

Sluggy
Posted by slugmama at 7:37 AM

Email ThisBlogThis!Share to TwitterShare to FacebookShare to Pinterest
Labels: getting stuff done, My 2010 list, things to do for the year, yearly goals